How Fast Can An Alligator Run

As some of the largest predatory reptiles on the planet, alligators don't have a lot to worry about. Without the need to pursue large game or run away from other predators, they are surprisingly lazy creatures.

Of course, that's not to say that alligators won't run at a person if they're feeling territorial or scared. However, most alligator attacks take place near the edge of the water, especially from the spring through the summer during the mating season.

So, just how fast are alligators?

Come dive in with us as we find out!

How Fast Can Alligators Run On Land?

Though they don't have to run often, alligator speed on land can easily get up to 30 mph.

Now, even though that alligator top-speed might seem fast, note that they can only run that fast in very short bursts. For a slight moment, an average alligator can get up to speed in a pinch.

So if you end up within a few feet of an American alligator (alligator mississippiensis), you might be in trouble. 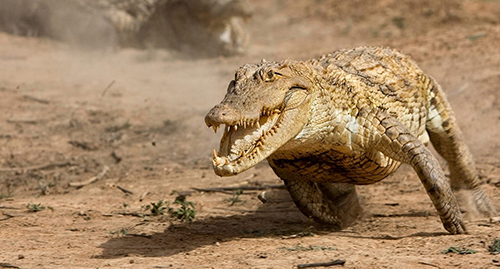 On the other hand, if you're on the other side of a field and you see an alligator coming toward you, you might have a pretty good chance of escaping.

What's really cool is how fast alligators can swoop up nearby prey in really short distances. They have incredible power and agility in these instances.

Okay, if alligators run up to 30 mph at top speed, what is an alligator's average speed?

On average, American alligators can run anywhere between 9 and 11 mph. Though, as we said earlier, most alligators are pretty lazy creatures and will often not exert more energy than they need to. It's pretty rare to see alligators run for more than 100 feet on land.

Compared to many other reptiles, alligators are quite sedentary. In many cases, these big retiles brumate, which means hibernating in such a way that they slow their bodies down to cope with dropping water temperatures.

You'll often see alligators poking their eyes and snouts out of the water to see and breathe, though most of their bodies remain below the surface of the water. The good thing for alligators, however, is that they're able to make use of all the energy they conserve really well when they need it.

FUN FACT: According to studies from the University of Florida, while most alligators only live very sedentary lifestyles and never travel long-distance for mating or food, some of these cold blooded animals are capable of traveling long distances over their lifetimes.

Can You Outrun An Alligator?

With how fast an alligator can run on land, we wouldn't try to outrun an alligator, though if you truly had to and knew a trick or two, you probably could. However, you'd need to be at a pretty fast distance from the alligator in the first place.

On average, humans run at about eight mph. Even the fastest man on Earth could only run just above 23 mph.

We wouldn't worry too much about it, though, as there isn't any documented evidence of alligators trying to run after humans. For starters, humans are too big for most alligators to think of as prey. Secondly, if you're not near an alligator nest or bugging the alligator in any way, it doesn't have a reason to waste its energy on you.

Plus, most alligators will only go up onto dry land to eat animal carcasses. Sometimes, they'll go onto dry land to try and snatch animals that have tethered themselves up, though that's about it.

They truly prefer to eat aquatic animals if they can.

In a hypothetical situation, however, an alligator with an average speed of 10 mph could catch the average human. However, there are much faster people out there, so it really depends on who the alligator is chasing after. Because alligators run quite fast, it is best to try and outrun them in a straight line, as you can run much faster without having to turn.

With that said, we don't recommend putting yourself in danger in the first place!

How Fast Do Alligators Swim?

Alligators can swim around 20 mph, which is much faster than your average person, which typically averages at around two mph.

You would definitely not want to try and outrun an alligator on land or in the water. As weather conditions warm up in the south, more and more alligators start to come out. During this time, the Florida Fish and Wildlife Conservation Commission says to take precautions when going swimming.

How Long Can Alligators Stay Outside Of The Water?

An alligator can stay outside of the water for as long as it prefers. Remember, though alligators spend the majority of their time in the water with other aquatic animals, they breathe air like humans.

What To Do If An Alligator Runs After You

If you ever find yourself near an alligator, slowly back away from it. Even a large adult alligator will likely be more scared of you than you are of it.

Alligator chases are pretty rare, as they don't want to waste energy or risk hurting themselves by running after a human.

Of course, if an alligator is desperately hunting for a meal, protecting their nest, or looking for a mate, it might attack. 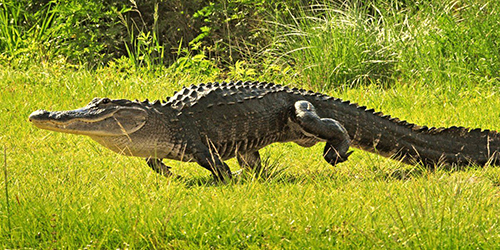 These incredible animals have a unique way of hunting in that they'll typically capture prey by rolling on top of it in the water until it drowns. If you can keep it from rolling over you in the water, it will tire quickly and give up.

It's important to seek medical attention extremely fast after an alligator bite, as it can easily become infected.

While it isn't common whatsoever, alligators might chase people on land or in the water. However, most alligators only attack near shorelines.

Alligator attacks typically only happen in a few circumstances:

Most alligators prefer prey that is much smaller than humans. They'll often eat Florida fish, frogs, snakes, birds, turtles, smaller mammals, and other aquatic animals. That's not to say that humans don't eat alligators every now and then! In fact, alligator bites are an extremely popular snack in the Florida region.

For more Crocodylia fun, head over to these additional articles!

​Biggest Alligator In The World