While whales are some of the most fantastic creatures on Earth, some of which live for longer than 200 years, every creature's life eventually comes to an end. The question most people have is,

How do whales die, and what happens to their bodies?

Do they drown, wash up on shore, or do other predators hunt them?

Come dive in with us as we explore more about how whales die.

Why Do Whales Die On Land?

So, why do beached whales die?

Unfortunately, whales get beached frequently. When a whale swims into shallow water and gets stuck, beaching occurs. The same thing can happen when the tide goes back out, stranding the whale on the beach.

Typically, the water that whales swim around in support their bodies. Without the support of the water, a beached whale's organs get crushed under the weight of their own bodies. Whales also have thick blubber, keeping them nice and warm while they're under the sea. 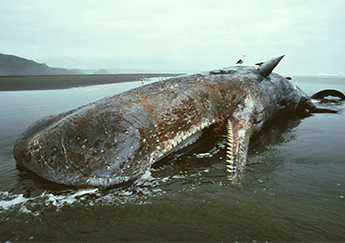 However, the thick blubber can overheat on land, killing the whale.  Dehydration is a contributing cause of death for whales that wash ashore.

Drowning in rising tides is another thing that can happen. This is because the high tide covers the beached whale's blowhole, it cannot get oxygen, and essentially drowns. If you're now wondering, "when are the highest tides?" we've got another informative article just for you.

Stranded whales can, however, survive for a few hours if they do happen to wash up on shore. Then, with the helping hands of a group of humans or the sudden rush of a high tide, whales can be sucked back into the ocean and reach deep waters once more.

Some whales beach themselves on purpose. For example, certain toothed whales, such as orcas, swim up onto the beach to look for penguins or seals to eat. It is a hunting tactic. Unfortunately, they'll sometimes stay on the beach for too long and end up stranded.

How Do Whales Die In The Ocean?

Sadly, whale poaching is still common around the globe, causing them to become near extinction. Deep-sea fishermen will use harpoons with barbed metal arrows linked to ropes to shoot whales and pull them to the surface.

In some cases, these whales swim for days until they bleed out or can no longer pull the boat.

Whale poaching is now illegal in most places worldwide. However, there are a few exceptions, such as Norway, Iceland, and Japan, where people continue harvesting whales for cartilage, blubber, and oil. Each year, hunters kill these deep-sea creatures in the thousands, however many more illegal whale deaths go unreported.

Whales also become victims of bycatch, where they get caught up in fishing nets meant for other fish. Experts estimate more than 300,000 whales get caught in fishing nets every year. Some fishermen will identify and free them, though many whales drown due to their inability to reach the surface to get oxygen.

Even though whales are some of the largest marine mammals, they still have predators. Of course, the largest whales which are baleen whales don't often have to deal with predator attacks. But smaller whales may be the prey of large killer whales and sharks. Polar bears are known to hunt beluga whales if given the chance.

Scientists have studied large orca pods hunting and killing blue whales, gray whales, sperm whales, and humpback whales. It's not uncommon for 50 or more orca whales to band together to kill a blue whale.

An adult whale will often swim around near the surface of the water to rest. Because they don't have many natural predators, large ships coming from the distance usually scare them.

When a ship hits a whale, it can cause bleeding, concussions, or internal injuries. Even if a whale can survive the initial collision, an infection can set in, or a head injury may stop it from being able to feed. When a whale is sick, it is more likely to beach itself.

Experts say that whales are hit by ships around 80 times per year. To try and mitigate the problem, scientists have invented devices that track whale activity in an effort for ships to avoid striking whales.

Humans pose a significant threat to whales in the form of pollution, whether solid or liquid. For example, fishing nets can be a major hazard to whales, no matter how small or large. If a whale becomes entangled in a net, it might not be able to swim to the water's surface to breathe. The whale could also die from starvation if it can't get the net off of its face.

Scientists have found many beached whales with tons of plastic in their bellies.

Because plastic is impossible to digest, it can end up completely filling their stomachs. When this happens, the whale is unable to swallow any more food.

On the other hand, airborne pollution can turn into liquid pollution, one of the major causes of death in whales. In addition, if a whale lives in a place with consistent liquid pollution, it could end up with a cancerous tumor. 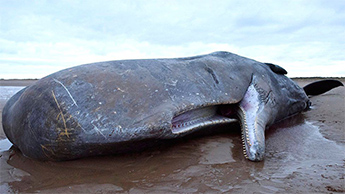 Numerous whale species migrate in search for food. During their migration, they will fast for many months. However, if a whale becomes injured or sick and cannot get to the feeding ground in time to find food, the whale may die from starvation.

The seas are changing for the worse and food is not as abundant for whales today. Humpback whales, for example, will travel to Antarctic regions during certain times throughout the year to feast on massive schools of krill.

Unfortunately, the krill cycle has changed drastically, and whales haven't had time to adapt.

Unless whales can alter their migration patterns, they could end up facing starvation. Whales that eat fish are encountering the same problem. Human overfishing has gone on too long. There are now fewer fish for whales to eat, and many whale species are in danger of starving to death.

While it might not seem too obvious, illness is one of the major causes of death for whales. For example, if a whale gets scraped or cut and doesn't heal fast enough, the wound could become infected with parasites and bacteria which can kill the whale.

Disease is one of the more prominent causes of whale strandings as well.

Do Whales Drown Themselves?

A whale will never purposefully drown itself, though if one gets caught in a fishing net, it might not be able to get back to the surface, in which case that whale will drown. Like humans, oxygen is required for their survival. A beached whale may face the same predicament. When the tide rises, water can enter its blowhole, drowning it before it has the ability to swim away.

Do Whales Die Of Old Age?

Just like every animal, the whale dies of old age eventually. Interestingly though, most whale species live longer than other animals.

Bowhead whales have the longest lifespan. Scientists have observed bowhead whales living in the ocean for up to 200 years!

Smaller whales tend to die much sooner. For example, the fin whale spans 60 to 100 years, and the humpback whale will live between 40 to 100 years. 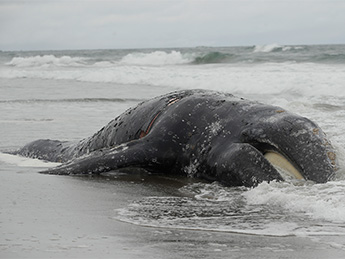 A blue whale will live anywhere from 70 to 90 years, while a sperm whale can live for around 60 to 80 years. Visit our "How Long Do Whales Live" article to learn more.

What Happens To Whales When They Die?

The body of a dead whale is incredibly difficult to remove from the sea. Whale carcasses may take many decades to completely decompose. Eventually, scavengers will remove smaller parts of a whale's body, though even then, it can still take many years for the whale to entirely disappear.

The insides of a whale are the first thing to decompose when it dies, causing gas to form within the body. Eventually, the whale's body will expand and float to the surface. Once the whale carcass floats from the sea floor to the water's surface, other scavengers will come and eat the whale.

Still intrigued? Head over to our other articles on the mighty whale!