Heart Of The Ocean

For anyone who's seen the movie Titanic, the Heart of the Ocean diamond certainly captures the imagination.

But, is there any truth behind that part of the story? Does a real diamond that impressive even exist? What would such a necklace be worth?

For the answers to these and so many other questions about the Heart of the Ocean, read on. This guide to separating the Hollywood fantasy from the actual history will cover everything you need to know.

Is The Heart Of The Ocean Real?

This is a more complicated question than you might think. The Heart of the Ocean necklace featured in the Titanic movie is fictional. However, there are centuries of history behind the story.

The fictional diamond featured in the Titanic was largely inspired by a real-life treasure, the Hope Diamond.

Originally mined in India, the 45.52 carat Hope diamond was cut from an even larger stone called the Tavernier Blue, later simply renamed the French Blue, or Bleu de France.

The Tavernier Blue diamond was sold to Louis XIV in 1768 who had it re-cut into a stone he called the "Diamant bleu de la Couronne de France" (the blue diamond of the French Crown). 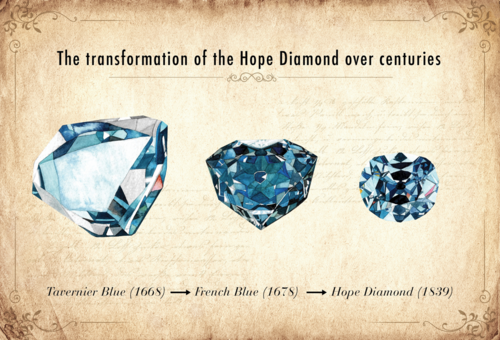 This name eventually led to a misconception that the diamond had been encrusted into Louis XVI's crown.

Louis XVI did indeed wear the stone. But rather, as part of a large pendant.

Shortly after Louis XVI's imprisonment, the pendant was stolen and didn't reappear until the early 1800s. At this stage it had been re-cut again, to form what is now known as the Hope diamond.

The Hope diamond was set in a white gold necklace surrounded by other diamonds, in a manner very reminiscent of the Titanic's Heart of the Ocean (other than the central stone lacking the heart-shaped cut from the movie).

Given its historical importance, and being the most famous blue diamond in the world, the Hope diamond necklace was eventually donated to the Smithsonian museum in the USA. You can still see it there today.

Is the Hope Diamond Cursed? 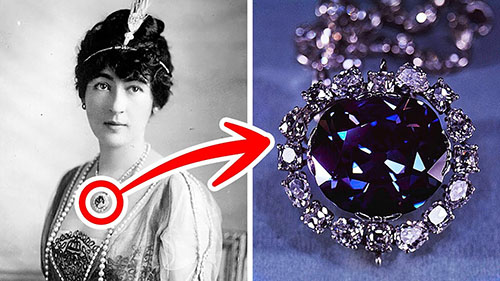 Since the beheading of Louis XVI and his wife Marie Antoinette, and the gem being stolen shortly afterward, there have been stories of a curse surrounding the Bleu de France/Hope diamond.

Part of the inspiration for these stories may come from an unusual property of blue diamond gemstones.

When UV light is shone onto a blue diamond, the stone starts to glow red from within.

This glow continues for a short while after the light source is switched off. As you can imagine, this gives the stones a rather eery look.

Was There a Famous Necklace on the Titanic?

Although there was no real "Heart of the Ocean" diamond necklace on the Titanic, it appears one of the guests on the ill-fated ship did have an unusually fine example of a diamond and sapphire necklace. This is thought to be the other story that inspired the inclusion of a jewelry-based element in the Titanic movie storyline.

A wealthy married merchant named Henry S. Morley had fallen in love with one Kate Florence Phillips. To escape the shame of this situation he had sold some of his shops to set up his wife and children for life, and was traveling in secret to start a new life with his lover. 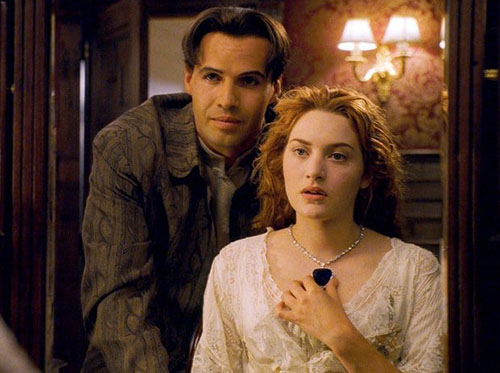 To show his dedication to Ms. Phillips, Henry gave her the necklace as a gift. Kate was wearing the necklace during the sinking and both she and the jewels survived aboard one of the lifeboats. Her paramour, who couldn't swim, was unfortunately lost at sea. 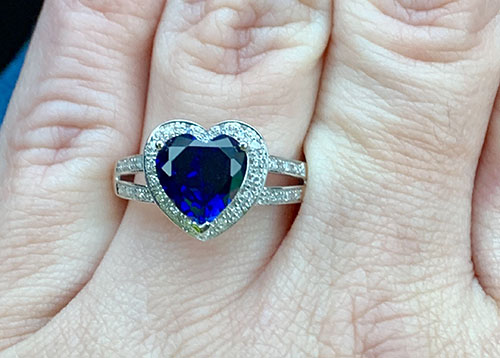 Unsurprisingly, Heart of the Ocean replicas are common in the wake of the Titanic movie's worldwide success.

Cheap reproduction necklaces can be bought and owned for as little as $30, while Heart of the Ocean engagement ring designs are also very popular.

However, there are also a couple of impressive pieces inspired by the Heart of the Ocean which deserve a special mention.

When the film was released, a jeweler in England made a high-quality replica of the Titanic Heart of the Ocean necklace.

This was sold as part of a charity auction and worn by Celine Dion (who sang the Titanic theme song) for several performances. She has even been reportedly seen wearing it more recently, although it turns out this is a copy.

Gloria Stuart, who played the elderly Rose in the Titanic film, loved the prop necklace used during shooting. In fact, she was so enamored with it that she spoke with famous jeweler Harry Winston prior to the 1998 Academy awards. He crafted her own Heart of the Ocean-inspired blue diamond necklace to wear during the awards ceremony.

How Much Is The Heart Of The Ocean Worth?

As we established earlier, the Titanic Heart of the Ocean necklace as depicted in the film never existed. However, here are the values of some of the real pieces related to the fictional diamond: 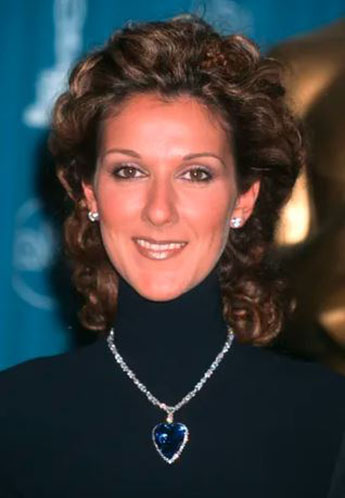 Was The Heart Of The Ocean Ever Found?

In the plot of the Titanic film. Rose DeWitt Butaker is given the Heart of the Ocean diamond necklace as a gift from her fiance, Caledon Hockley. However, she is being pressured to marry him to save her family's status and financial situation, not out of love.

During the crossing to America, Rose meets a young Third-Class passenger named Jack Dawson, who she quickly falls for. At one point, Rose even pays Jack to draw a nude sketch of her wearing nothing but her extravagant piece of jewelry.

During the sinking of the Titanic, Rose returns the unwanted gift to Cal's safe along with a note saying she does not wish to be with him. After an attempt to frame Jack for stealing the necklace, Cal gives Rose his coat forgetting that the Heart of the Ocean is still in one of the pockets.

Unbeknownst to the modern-day research team searching the wreck of the Titanic for the necklace, Rose (now Rose Dawson Calvert) never lost the Heart of the Ocean, having had it on her person when she escaped the sinking ship. At the end of the film, she lets it fall into the ocean in memory of her lost love Jack, who saved her during the sinking of the Titanic but at the cost of his own life.

It has been noted how closely this aspect of the story between Jack and Rose matches the true tale of Kate and Henry, the couple on the Titanic with a real diamond and sapphire necklace. Although their initial circumstances were different, they too were lovers who were separated by the sinking, with the lady and the jewelry surviving but the man sadly meeting his end.