History of the Foam Surfboard 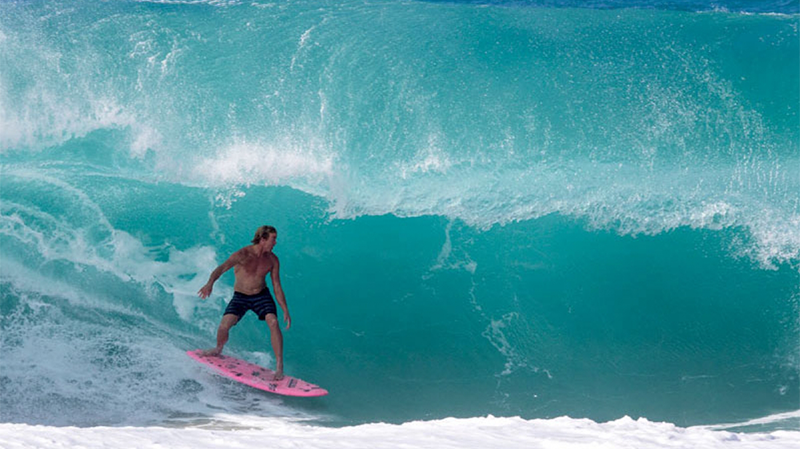 Foam boards are synonymous with a surfer’s first time.

However, they’re also in nearly every surfer’s repertoire. Usually because we’re reluctant to lose the sentimentality, but the boards are also kept around for when the storm brings in a choppy swell. Sometimes that extra stability is necessary!

So what makes them so pervasive and where did they come from?

We’ll tackle these questions and more as we dive into the history of the soft-top foam surfboard.

No, not the dance jig. Boogie boards! Yes, to fully appreciate the history of the soft top board we have to switch sports but stay in the exact same spot.

Boogie boards, bodyboards, sponges, whatever handle you fancy, it’s all the same thing. But Tom Morey is the name that you need to know.

Morey was a mathematics graduate in Southern California who used his background in engineering to cook up some new products for the surf community. He’s worked on the nose pocket, what he calls “The Wingtip” and even a three-piece traveling surfboard. But his real genius came around in 1969, out surfing the break at Doheny Beach. He watched a kid ride a tiny four foot board. After seeing this contraption up close (and noting the design of it was all wrong), it would be two more years before this 4-foot predecessor became a full-fledged million dollar idea.

In 1971, after a period of trial and error out of his garage in Hawaii, Morey was able to reproduce that kid’s idea to perfection. Using polyethylene foam, he created a board with roughly the same dimensions: about 4 feet tall, 2 feet wide, and a few inches thick. He then covered it in newspapers.

After a quick test run down at the beach, his fate was sealed. Morey’s Boogie Boards were alive and electric. “Boogie” a name referring to the Boogie-Woogie, a style of blues he fancied.

Kinda yes and kinda no.

It would be over 30 years before the boogie board and the surfboard would fuse together as one. The reason this seemingly obvious design combo took so long is uncertain. Though it could have been due to brand protection.

During the 80’s and 90’s boogie boards were on the rise. Bodyboarding teams were sponsored. The small rectangles were ubiquitous on the beaches. To put that in jeopardy by offering something in between the two, might have risked its uniqueness.

Another possibility was the fierce divide between the two sports. Surfers were up in arms over the new fad. They wanted nothing to do with anything boogie related. However, as technology and materials improved, it was inevitable that that soft, squishy material would translate over.

Using the Boogie Board brand’s manufacturer, AGIT, Matt Zilinskas and John Yeh produced a soft-top surfboard made of the expanded polystyrene foam and plastic found in current bodyboards. They considered it a “beginner’s board.” Safer and more buoyant, due to the squish, than any board on the market. 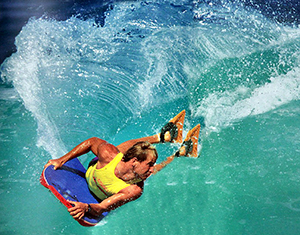 All rise for the Costco Wavestorm

As we relaxed into the millenium, this new idea quickly took over the surfboard market. Brands were quickly developing their own soft-top surfboards to tap into the beginner territory. Brands like BZ, Catch Surf, INT, Giantex, Softech, and more were quickly on the scene. However nobody can top the rise of the Costco brand board: Wavestorm.

Wavestorms have made a social media splash and have ingrained themselves into the soft-top hall of fame. On the one hand, the pervasiveness of their products is due to their quality of board. People love the ability to teach on them and the ability to catch any wave regardless of conditions. On the other hand, surfers love to hate them. They think the sight of a Wavestorm means the person will have no understanding of the rules of surfing. It’s a common theme; there will always be surfers who love to hate anything that’s not… well… themselves.

At the end of the day, soft top foam surfboards are a great buy for any surfer. If you’re in the market for one of these boards, FinBin has you covered.

Even your dog will love them!

So what made these soft-top surfboards climb to the top so quickly? Well, having a board that’s softer and more buoyant gives a lot of stability to the surfer. For those of you who have ridden a 10-foot foam longboard, the first thing you probably noticed was, there’s no way you can tip it over.

Most beginners learning how to pop up on a surfboard will hesitate to go straight from laying down to their feet. They’ll get to one knee or two before going further. With any other board, this is a surefire way to belly flop or tip over. But with these boards, you can take your time. Even dogs have been caught shredding the gnar on those long soft-tops. You’ll thank us later. 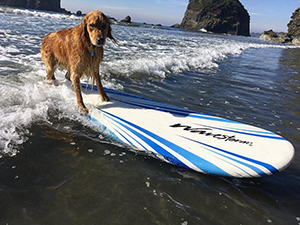 That about wraps it up...

What started as a unique vision by Tom Morey has grown into a soft-top soft spot for surfers everywhere. And it’s easy to see why. Contrast the simple rideability of an 8-foot foamer with a 6-foot short board. Sure you might not be able to whip it around like a snake, but being able to bypass the more advanced techniques of wave positioning sounds like a beginner’s dream.

Now if only there was something we could put on the front that would prevent them from nose-diving... 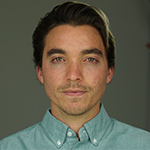