Are you wondering about how dangerous sharks are? Or maybe you're just after some statistics about these magnificent marine animals.

There are numerous shark species, each with their own particular adaptations from the weird-shaped hammerhead shark to the lantern sharks that can actually glow in the dark!

If you want to learn fun facts as well as some more serious information, such as the impact of climate change on sharks, carry on reading to learn all about these fabulous creatures.

With over five hundred species of sharks, there is plenty to know about these great creatures of the deep. From blue sharks to great whites, here are some interesting facts about sharks.

How Do Sharks Hunt?

Sharks are apex predators. This means that they are at the top of the food chain so they have a critical role in maintaining the health of the oceanic ecosystem.​

When they catch and eat their prey, such as fish, they help to keep the population of their prey balanced.

Sharks have lots of adaptations that make them excellent hunters.

Most sharks have good eye-sight, and are able to see in color. Plus, they have great night vision thanks to the tapetum, a special layer of reflective tissue in their eyes.

Some shark species have rows upon rows of sharp teeth for hunting. Their teeth are often lost but easily replaced, in fact, a shark can end up regrowing thousand of its teeth during its lifetime.

Sharks also have a kind of 'sharky sense'. They have special organs around their mouth, nose, and eyes called ampullae of Lorenzini that allow them to detect electromagnetic fields produced by their prey, making them formidable predators.

Sharks also have an incredibly sensitive sense of smell which they not only use for hunting but also when searching for a mate. They can smell even tiny amounts of blood from potential prey, being able to detect about a teaspoon's worth of blood in a typically sized swimming pool.

Which Is The Largest Shark Species?

The largest shark species, also the largest fish species, is the enormous whale shark that reaches over forty-five feet long and can weigh twenty thousand pounds plus!

You might think that the larger the shark the more dangerous is, but this isn't true. These particular animals only eat plankton, fish, and shrimp.

Filter-feeding basking sharks are the next largest sharks, reaching over thirty feet in length. These sharks are gentle giants, consuming various species of plankton. 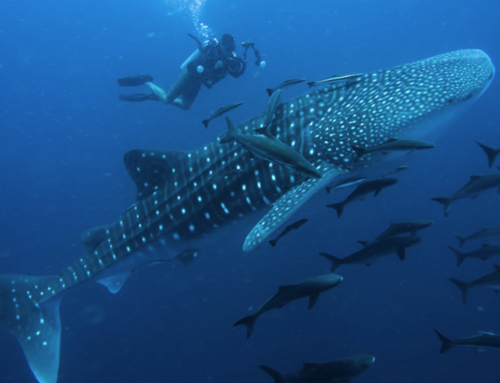 Great white sharks are another large species of shark, that can grow to over twenty feet long and unlike the rest of the larger shark species, can pose a danger to humans.

At the other end of the spectrum, you have the dwarf lantern shark. These tiny sharks grow to around six to seven inches long making them the smallest shark species in the world!

Which Are The Most Dangerous Shark Species? 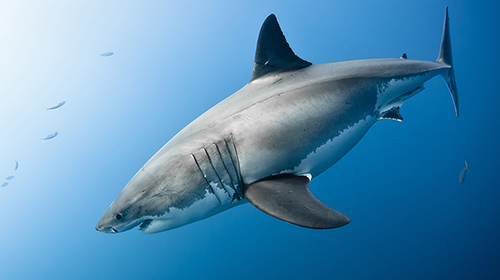 Out of 548 know species of sharks, most sharks are pretty harmless to people with only thirteen species have been known to have bitten humans.

The five-year worldwide average for bites is seventy-two.

Only nine fatalities resulting from unprovoked shark bites were recorded in 2021, according to the International Shark Attack File collated by the Florida Museum of Natural History.

The most dangerous sharks, with the highest number of unprovoked attacks and fatalities, are the tiger shark, bull shark, and great white shark.

In the US, the chance of being attacked by a shark is around one in eleven and a half million and the chance of this being fatal is less than one in two hundred and forty-six million, so pretty rare!

Most shark attacks, over half, have occurred to people partaking in board sports, such as surfing, although swimmers and waders also make up a large number of victims.

If you go in the water in areas where sharks are known to inhabit, it's best to avoid splashing around loads and wearing jewelry that the shark might mistake for shiny fish scales.

It's also a good idea to take a buddy swimming, keep close to the beach, avoid the water around dusk and dawn, and not swim where there are lots of fish or near fishing spots.

What Is The Weirdest Shark Species?

When it comes to sharks, there are some pretty weird species out there with even more bizarre adaptations and behaviors. Here are some of our favorites!

The hammerhead sharks probably have the oddest shape, with their uniquely shaped head. Not only this, but they are also thought to be cannibals, sometimes eating other hammerhead sharks, and immune to stingray venom. 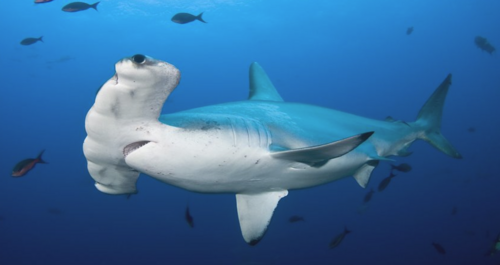 The cigar shark also called the cookie-cutter shark, gouges out chunks of flesh out of its much larger prey, as if cutting with a cookie cutter. It will just leave a scar on larger animals but small ones may die and it does eat some prey whole. They like to hover in a column of water, and stealthily sneak up on their victims.

Lantern sharks are some of the smallest species of shark and they all have photophores. These are special organs that emit light, yes they glow in the dark!

This bioluminescence helps with camouflage when they are hunting in shallow water, blending them with the sun rays from above. In darker areas of water, the lights attract prey. 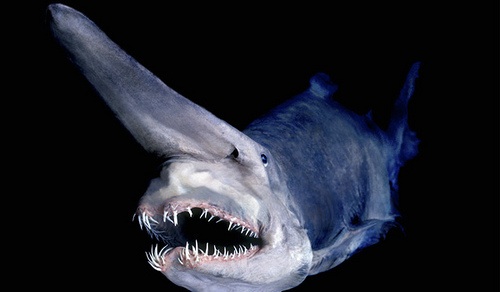 Another weird-looking shark is the goblin shark. This Mariana trench animal has pink skin and a long, flat snout with protruding jaws lined with needle-like teeth.

Although it is pretty gruesome looking, the goblin shark is a very rare deepwater creature, thriving in the depths of the sea, and poses a minimal danger to people.

Their noses contain special organs that sense the location of prey.

Sadly a large number of sharks are caught up in fishing gear and die by accident.

Some species are also fished for their fins, which is a delicacy in certain parts of the world.

It's thought that around a hundred million sharks are killed by humans each year.

Climate change is impacting most sharks.

Climate change causes the water to warm up which affects all aspects of the marine ecosystem including apex predators like sharks.

Filter-feeding sharks are also endangered by plastic pollution as they can accidentally swallow this waste.

Many shark species are endangered. The Pondicherry shark hasn't been spotted since the late seventies, and some scientists suspect it may actually be extinct.

The Ganges shark is a freshwater river shark threatened by overfishing and habitat destruction however the Indian government has now banned the fishing of this creature.

Unfortunately, the list goes on but there are some things you can do the protect sharks such as reducing the amount of single-use plastic you use, volunteering for a beach clean-up, and making good choices when it comes to eating fish. Do your part by choosing seafood only caught using sustainable fishing methods.

You can support charities working on ocean conservation and climate change. Plus, you can help educate people by explaining to them that sharks are critical to the ocean ecosystems. Dispel myths by telling others that most sharks are not scary or dangerous, and need our protection.

Facts About Sharks For Kids

Now, less of the serious stuff! Let's end with our top ten fun facts about these awesome marine beasts.

To learn more about sharks, check out our informative articles!