Dolphins are truly amazing creatures and there are probably loads of things that might surprise you about these stunning animals.

With loads of different dolphin species found all over the world from freezing arctic waters to tropical ocean shores to fresh water lakes and rivers, they are incredibly well-adapted creatures.

Carry on reading to find out all about these animals, from dolphin fun facts to some of the more serious issues faced by some dolphin species.

Dolphin Facts That May Surprise You!

Dolphins are amazing, playful creatures known for their intelligence and cute smile. Let's take a look at some interesting facts about dolphins.

Are Dolphins A Type Of Fish?

Fish and dolphins are adapted to live in water, both having fins and streamlined body shapes, however, dolphins are in fact mammals.

Like all mammals, dolphins have lungs and breathe air so need to take regular trips to the surface of the water, if they didn't, they would drown.

Fish on the other hand have gills that allow them to absorb oxygen directly from the water to survive. 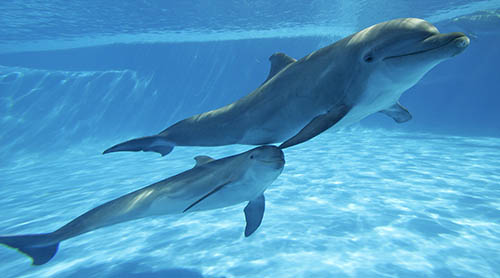 Dolphins vary from fish in other ways. Dolphins evolved from mammals that lived on land that have their legs positioned under their bodies. This evolution from land mammals means a dolphin's tail actually moves up and down rather than side to side like a fish's tail when it swims.

Unlike fish, dolphins are warm-blooded mammals and have layers of fat or blubber to help maintain their body temperature.

To reproduce, fish lay eggs, usually in large numbers, whereas dolphins give birth to live young which they feed with milk from their nipples. In general, dolphins birth a single calf anywhere between every one to six years.

Where Are Dolphins Found?

Dolphins live all over the world and are found in oceans and rivers. Some species of these marine mammals like coastal waters whilst others prefer shallow water in coastal areas.

Since dolphins are warm-blooded mammals, most species like to live in tropical and temperate waters. Killer whales, also known as orcas are the only type of dolphin that live in Antarctic and Arctic water, with their larger size offering better protection from the freezing temperatures.

How Many Dolphin Species Are There?

There are forty-two species of dolphins that are split into different families. The ocean dolphin family is the largest family and there are also some river dolphin species.

With new discoveries and information, certain dolphin species will most likely be split further, into more than a single species or subspecies.

The naming of some dolphin species can certainly be a little confusing at times. There are several species of dolphins that have 'whale' in their name, for example, killer whales, pilot whales, melon-headed whales, and false killer whales.

A couple of dolphin species even have both dolphin and whale as part of their name, such as the southern right whale dolphin, and don't get humpback whales and humpback dolphins mixed up!

How Big Are Dolphins?

This very much depends on which species of dolphin. There are several small species, the tiny vaquita and tucuxi dolphins are around five feet long and weigh around 100 lbs.

There are also larger dolphins, with the largest dolphin being the killer whale or orca. Male killer whales can grow over thirty-two feet long and weigh a whopping 22,000 lbs. Their dorsal fin can reach over six feet long.

Most dolphins can swim quite fast. Bottlenose dolphins have been recorded at speeds of around eighteen miles per hour.

Killer whales or orcas are a type of dolphin. They are very fast swimmers and can reach speeds of around thirty-five miles per hour.

What Do Dolphins Eat? 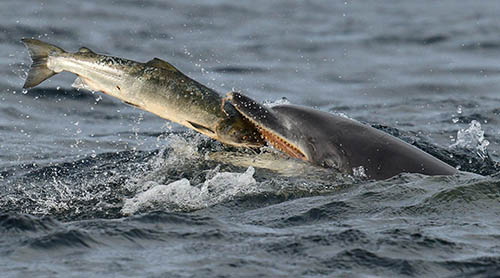 Dolphins are carnivorous meaning they eat other animals.

These predators eat all sorts of aquatic creatures such as crustaceans, squid, and various fish species, such as mackerel and sawfish.

Dolphins that prefer shallow coastal areas might eat smaller fish such as herrings.

They don't chew their food but break their prey up into smaller chunks before they swallow it.

During herding, dolphins surround their prey, such as shoals of fish, and they also use a technique called corralling which is when dolphins herd a group of animals to an area that makes them easier to catch. This also helps to ensure there is enough food to feed the pod.

Dolphins are endangered, with some species considered at greater risk than others. The vaquita, which lives in a tiny area of coastal waters off Mexico is the most endangered species. With around ten individuals left, the vaquita is sadly functionally extinct.

Other dolphins that are facing similar futures are the Maui dolphin, with about fifty left in the wild. Maui's dolphin is only found in the water off New Zealand's North Island. Hector's dolphin found near the South Island is also in a similar situation.

These marine mammals' numbers have decreased as they accidentally get caught in fishing nets and drown. More are caught up in fishing gear each year than are born, so the population plummets.

Also, species like the Maui dolphin are slow to breed with dolphin calves being born to a single female only every two to three years and it takes them up to nine years to sexually mature and become capable of breeding.

Not all species are under threat because of entanglement in fishing equipment. The South Asian river dolphin has had its habitat reduced and populations fragmented due to the building of dams and industrialization of the river area.

The Yangtze River dolphin, also known as the baiji, from China, is thought to be extinct. This is the first dolphin or whale whose extinction was caused by humans. These particular river dolphins' extinction was a result of entanglements in fishing gear and loss of habitat due to the building of the Three Gorges Dam.

Now we've looked at fascinating dolphin facts, some of which are quite sobering, here are some dolphin fun facts to lift your mood and help you to remember why we should all be working to support solutions to save these incredibly intelligent, playful creatures.