If you're ready to explore the reasons that dolphin vaginas are so strange, lets go!

Spiral-Shaped Vagina Used As A Weapon Against Potential Mates

Female dolphins have corkscrew-like vaginas that have evolved to protect them from other dolphins. While we like to think of dolphins as kind, playful creatures, their sexual nature can be very aggressive.

If these bottlenose dolphins can't find the female's sympathy, she will get aggressive. 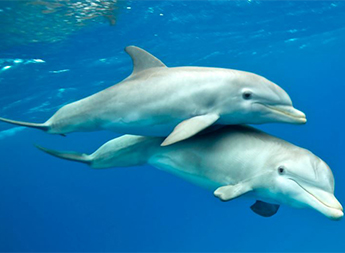 While she might not be able to escape sexual coercion, she can reposition her body during sex so that the sperm cannot reach the egg. In addition, thanks to her corkscrew-shaped vagina, she can steer the sperm or the dolphin penis in the wrong direction, so it never gets to the egg.

In essence, the female dolphin has more control over which bottlenose dolphin will contribute it's genetics to her offspring.

Scientists studied four different species of dolphins and found consistency between all of them. The best-case scenario for successful fertilization meant the male dolphin would have to be on top with the penis hooked underneath the female partner. They found that deviating from this position would most likely mean unsuccessful fertilization. 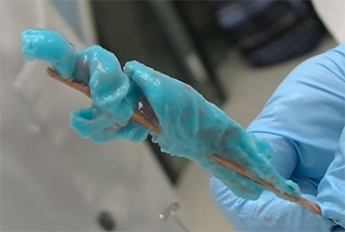 The shape of the dolphin vaginas is one of the strangest and most striking features of female dolphins. For many years, marine biologists have had an idea of how dolphin vaginas looked, knowing they had inner folds and flaps. In fact, more than 2,300 years ago, the Greek philosopher Aristotle noted the shape and design of the dolphin reproductive anatomy.

One of the ways that scientists know the shape of the dolphin's vagina is by using 3D silicone molds. Every dolphin species has unique vaginas with different twists, spirals, and folds.

For example, female bottlenose dolphins have vaginas with complex spiral shapes. On the other hand, female harbor porpoises have 13 specific folds.

The question many scientists have is,

What is the point of this complex shape, and wouldn't it make sex difficult?

As we know, the whole point IS to make sex difficult for male dolphins.

Dolphin Sex - How Does It Work?

Of course, scientists wanted to take it a step further by exploring how the bottlenose dolphin penis and vagina fit together during sex. To figure it out, scientists took cetacean penises from dolphins that had died of natural causes and artificially inflated them into the female genitalia of bottlenose dolphins.

These scientists created digital 3D models and CT scans of these two parts to simulate how the penis would rotate. From these models, scientists could tell that females could limit dolphin penises from penetration.

However, if it makes you feel better, dolphins are one of the few species beyond humans that have sex throughout the year. This tells us that dolphins likely have sex for pleasure. Just like the apes and the bonobos, dolphins have a very liberal sexual attitude. Of course, there could be a few other reasons for this, such as establishing sexual dominance, a species hierarchy, or for educational purposes.

As of now, however, we're not totally sure if it's just for fun or there are other specific reasons.

Back in 2020, dolphin vaginal secretions became a hot search topic online. A Facebook post went viral, noting that female cetaceans had a unique vaginal secretion that caused males to ejaculate over and over again. This person also claimed that scientists once used this unique secretion on a monkey penis. The monkey supposedly died of a heart attack.

Of course, the wild story became a meme, though many people believed the information to be true.

The story originated on a Reddit forum back in 2009, when someone claimed they learned of an organic chemical that sat within the vaginal folds, which caused males to orgasm again and again as long as their penises remained within the vaginal tract. This was later found to be a troll page, with no scientific backing.

A Look Beyond Dolphins

Cetacean vaginas are not the only complex vaginas out there. For example, geese and ducks have extremely complex genitalia which protects them from unwanted mating, just like the dolphins.

Some female ducks, for example, have corkscrew-like vaginas that spiral opposite of their particular male species. This means that ducks can fight off unwanted or aggressive males, as they won't be able to fit their penises in with ease.

The same thing is true in some species of insects, such as spiders.

Final Thoughts - A Deeper Look Into the Dolphin Reproductive Anatomy

We're lucky that we're living in an age of discovery, where scientists have started to shed light on the reasons behind the strangely shaped genitalia of these marine mammals. The studies that have taken place in this field in the past few years is the first work on the reproductive anatomy of these marine mammals in over 100 years!

There's no doubt that dolphins are complex creatures to begin with, though understanding more about dolphins mating can give us a deeper look into their personalities. It might hurt to find out that these cute creatures may not be as innocent as we'd like to think, but the animal kingdom is wild and should never be thought of as anything less.

Even beyond the marine mammal world, we're starting to gain a better understanding of vaginal complexity in different species as we continue to research the reproductive tracts of the animal kingdom. From the disposable penis tips of the sea slug to vaginal techniques used to ward off unwanted males, to the sizable blue whale penis, the world of animal genitalia is quite different from our own, which is what makes it so fascinating.

If you're thirst for dolphin knowledge is not quite quenched, we've got plenty of other equally interesting articles.

Feel free to learn more at our additional pages:

What Do Dolphins Eat?

How Smart Are Dolphins?