While dolphins have always had a reputation for being some of the friendliest creatures around, they might not be as friendly as you thought. These ultra-intelligent animals can be dangerous, even with that perpetual smile.

Unfortunately, dolphins have been responsible for vicious and sometimes fatal human attacks. Come dive in with us as we explore some of the ways that dolphins might be more dangerous than you believed.

People often wonder "do wild dolphins attack humans?" and while fatal dolphin attacks on humans are extremely rare, there is one reported instance that occurred in 1994 in São Paulo, Brazil. It is documented that internal injuries lead to the death of a man after being rammed by a dolphin.

In addition, in the past decade it seems as if the number of dolphin attacks per year has increased.

Although this species didn't even come close to making it onto our most dangerous sea creature list, if feeling threatened or in danger, dolphins can certainly be dangerous animals.

Some humans can get a bit too aggressive when interacting with dolphins, which can result in an attack. 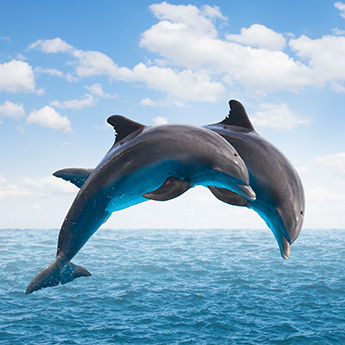 In 2013, Valerie Ryan went swimming off the coast of County Clare, Ireland, next to the Doolin Pier. For reasons unknown, Dusty, a typically friendly dolphin who was known for swimming around with the locals, got a bit aggressive that day.

As Valerie started swimming towards Dusty, Dusty became territorial and started flapping her tail. Though Valeria quickly tried to swim away, Dusty plowed into her with her snout. Luckily, a few locals were able to drag her out of the water and get her to a hospital. Unfortunately, she had a damaged lung, three broken ribs, and six spinal fractures and had to take five months off of work.

The same thing can happen to a trainer, or a tourist in a dolphin tank.

In 2019, a few captive bottlenose dolphins attacked a ten-year-old girl Lexi Yeo after she went on a bottlenose dolphin swim experience in Cancun, Mexico. The girl was dragged underwater in a floating closed sea tank, but thankfully survived with just bite marks and scratches.

Yes. Dolphins are hunters, and they will bite when hunting down prey or protecting themselves. They have incredibly sharp teeth that they use to rip their food apart. You'll find anywhere between 80-100 teeth in the mouth of a bottlenose dolphin, which they use to secure and grip their prey.

Bottlenose dolphins can certainly bite humans and will do so occasionally. People have been bitten and pulled beneath the surface by dolphins so frequently that the National Marine Fisheries Service has released several warnings about swimming with them.

In 2012, an infamous dolphin attack took place where a dolphin bit an eight-year-old girl at SeaWorld.

A few years back, the team at Nat Geo Wild put out a short video showing a male dolphin at a water park jumping on a female park-goer in a manner that could only be described as suggestive. The dolphin jumped up out of its pool, placing itself between the woman's legs before it started to hump her.

In fact, in 2002, a few authorities put out warnings for English Weymouth Harbor swimmers, saying the dolphins get sexually aggressive. In addition, the authorities noted that a male dolphin had already attempted to mate with a few divers.

In another example, Margaret Howe, a lab assistant researching dolphins, allowed her test subject, Peter the dolphin, to rub his body on her hands and legs while researching the way in which dolphins communicated. She described the relationship as a "sexual one on his part."

While dolphins don't necessarily rape or injure humans on purpose, they do exactly that within their own species. In 2004, a group of scientists performed a long-term behavioral study on a group of bottlenose dolphins in Shark Bay, Australia. The scientists found that the male dolphins would go out in gangs to chase and mate with female dolphins.

Beyond their own species, male dolphins have also displayed aggressive sexual behavior towards other animals. For example, in 2018, two bottlenose dolphins horrifically attacked a few porpoises without apparent reason.

Fun Fact: The dolphin vagina is corkscrew-shaped in an attempt to prevent sperm from reaching the egg.

While the occurrences of sharks or dolphins attacking humans are rare, they both happen. With that said, dolphin attacks don't amount to nearly as many shark attacks. Dolphins are intelligent creatures and can be very curious, which is why they're more likely to interact with humans than sharks are. Shark attacks only occur due to mistaken identity.  Sharks have poor eyesight and only attack humans because they misinterpret us for seals, whereas dolphin attacks seem to be intentional.

Dolphins and killer whales are both part of the Delphinidae family.  So technically killer whales are not whales at all, but in fact dolphins, meaning there is an even higher number of human fatalities caused by the dolphin community. Our Are Orcas Dolphins Or Whales article explains this concept in further detail.

One of the most brutal dolphin attacks on record was described by National Geographic in 1994, when two men swimming off the coast of Sao Paulo, Brazil, were rammed by a large dolphin. Unfortunately, one of the men passed away from post-accident internal injuries.

That occurrence is the only known fatality caused by dolphins, while in contrast, 8 people died from shark attacks in 2021 alone. While this is a much higher number in comparison to dolphins, don't worry too much, as your odds of dying from a shark attack are still only1 in 3.7 million if you live within 100 miles of the coast.

Dolphins are cold, calculating predators. When they get hungry, they'll use different tricks to trap and kill their prey. Scientists have observed dolphins in Florida's waters using their tails to splash mud around in circular formations, trapping fish to eat. Some researchers have seen dolphins out in Shark Bay, Australia, digging up prey on the ocean floor using sponges.

Even more impressive, dolphins have the ability to communicate their unique tricks with other dolphins, allowing them to improvise and team up.

Sometimes, they will gather in teams of more than a thousand to hunt, which is a pretty terrifying thought.

Dolphins Can Be Mean Without Reason 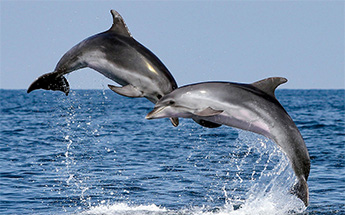 Dolphins like to torture their prey before eating, which is not something commonly seen within other species. For example, octopuses are deadly animals with unique defense mechanisms, so dolphins need to exercise caution if they want to eat them.

For this reason, dolphins will often beat octopuses up by tossing them around the ocean floor relentlessly, smashing them into much smaller pieces before they eat them.

In other cases, dolphins have been seen bludgeoning porpoises around in the hundreds without ever eating them.

Dolphins Love To Kill Other Dolphins

While you might not want to hear it, researchers now know that adult dolphins will sometimes kill other dolphins' babies. In the 2002 Journal of Wildlife Diseases, a study of nine bottlenose dolphins were found dead from severe blunt-force trauma off the coast of Virginia.

Apparently, these little dolphins suffered soft-tissue contusions, lung lacerations, and multiple rib fractures. In addition, one of the dolphins had a massive bite wound across the left side of its jaw.

Dolphins In the U.S. Navy

Dolphins are so intelligent that even the U.S. Navy has utilized them. For example, in a National Geographic article about the U.S. Navy back in the 1960s, they wrote that the military had trained dolphins to find equipment that the military had lost out at sea and bring it back. They would also use dolphins to identify intruders who were caught swimming in off-limits areas.

You definitely wouldn't want to find yourself up against a dolphin trained by the U.S. military.

To be capable of being trained in this manner, they must be extremally smart. But exactly how smart are dolphins? Marine biology researchers are still in the process of finding out!

Do Dolphins Protect Humans From Sharks? 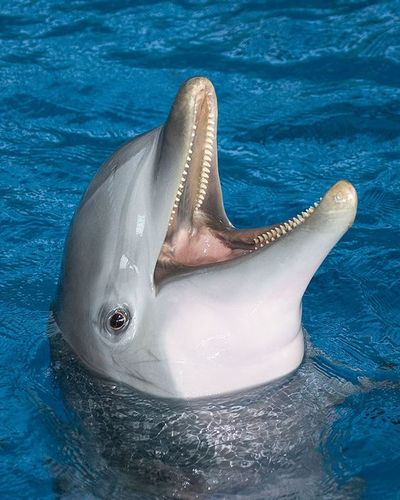 Yes, dolphins have saved humans from sharks on a few occasions.

There were two separate incidents back in 2004 and 2007 when a pod of dolphins swam in circles around a few surfers for half an hour, warding off an aggressive group of great whites.

In another instance in New Zealand, four swimmers were herded together by a pod of dolphins. The dolphins were doing tight circles around the swimmers, sheltering them from a great white lurking only two meters away.

In 2000, a fourteen-year-old boy was on a boat in the Adriatic Sea. He fell off, nearly drowning before a friendly dolphin rescued him by pushing him to the boat so that his father could pick him up. Though there weren't sharks involved, it became clear that dolphins could sense when a human is in danger and would help protect them if necessary.

Wild dolphins can certainly be dangerous towards humans. However, they are wonderful at socializing with dolphins and other sea creatures (especially Atlantic spotted dolphins), which gives them an intelligent advantage over other animal species in the ocean.

We often forget that dolphins are wild animals. Similar to other land or marine mammals, dolphin behavior is complex. Some dolphins are tranquil creatures, while other dolphins can be incredibly aggressive.

Researchers believe that dolphins will kill for fun, with the only plausible explanations being high sex drive or competition over shared food resources.

With more and more people given the ability to travel and interact with captive dolphins, we'll likely see a significant number of attacks towards humans in the coming years.

If you ever find yourself interacting with dolphins, it's important that you do so at a distance unless you have a dolphin trainer nearby. It's best to purely observe, so you don't end up getting hurt. As 1,100-pound wild animals, the last thing you want to do is get in their way.

The animal kingdom is a vicious place, and knowing where we stand in their realm is key.