Back in 2016, for the very first time in history, the elusive deep-sea ghost shark was caught on camera. This curious little ghost shark species was detected by scientists, creeping around its deep, dark habitat.

Of course, the question most curious sea lovers have is,

Just what IS the deep sea ghost shark, and what makes it such a unique creature?

Come dive into the depths with us as we explore more about this pointy-nosed blue chimaera.

What Is The Ghost Shark?

The ghost shark, a rather odd-looking fish, is a part of the Chimaera species, a small collective of cartilaginous fishes. These animals aren't technically sharks, even though they have been given the ghost shark nickname. These mysterious animals are part of three families, even though they are called chimaeras and often lumped into a single family.

This unique little ghost shark was filmed in its natural habitat for the first time back in 2016. One of the special things about ghost sharks is that they have a penis that pops out and retracts from their forehead. Of course, this feature is exclusive to the male chimaeras. 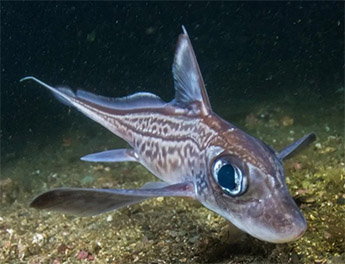 Ghosts sharks are known for their winged fins, protruding forehead penis, and dead-eyed gaze. In addition, the ghost shark's retractable sex organ resembles a spiky club that sits at the end of a stalk. Scientists also know that the first dorsal fin, which is the fin present on its back, is uniquely shorter than its curved spine.

Ghost sharks are also much different than hammerheads and great white sharks in that they never develop hundreds of razor-sharp teeth. Instead, these sharks eat much smaller prey by chomping down on them with mineralized tooth plates.

Beyond that, this pointy-nosed blue chimaera has been around since the era of the dinosaurs, more than a million years ago. However, even now, scientists don't know much about ghost sharks.

Where Do These Ghost Sharks Live?

As of now, the only thing scientists know is that they've found this unique species off the coast of Hawaii and California in the depths of the ocean, though some scientists have seen them off the coast of New Zealand and Australia. These sharks spend a lot of their time trailing around the soft-bottom terrain, 67,000 feet below the surface, the same depth at which you will find the oldest shark in the world.

The program director for the Moss Landing Marine Laboratories' Pacific Shark Research Center, Mr. Dave Ebert, said that divers didn't intend to stumble upon this unique shark. However, Ebert noted that the shark was interestingly "comical" in that it keeps bouncing its nose on the camera and playfully fluttering around.

With a remotely-operated vehicle, the team was able to get a gorgeous video of this unique shark wandering about.

National Geographic received the video of the fish from the California Monterey Bay Aquarium Research Institute after they filmed them in a spot where the sun's rays penetrated the deep, dark water.

Chimaera experts have seen female chimaeras come up to shallow depths as little as three meters to lay their egg cases.

We also know that the ghost shark diet consists primarily of worms, mollusks, and shellfish that live on the ocean floor. Unfortunately, because they don't have large teeth or bodies, they are the prey of larger sharks. 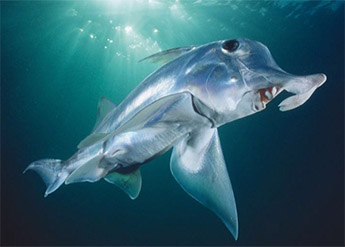 Since the 1960s, scientists have found ghost sharks swimming around their natural habitat.

As of now, most ghost sharks that scientists have studied are about three feet in length. But not all of them are small sharks.

The largest ghost shark known to man was 49 inches long.

Due to that finding, many experts believe that these Chimaera specimens have the ability to grow up to six feet in length.

After recently searching through several dead pickled fish, scientists realized that the Eastern Pacific Black Ghostshark was its own new species, not the same species.

Ghost sharks use their wing-like fins to fly around through the deep, dark waters of the northern hemisphere.

In coastal waters, ghost sharks and chimaeras have become target fishery species. When fishermen use deep-sea nets, they also get hung up in bycatch. Of course, because these aren't well-known sharks, it can be challenging for scientists to understand the health of their population so that they can help with conservation and management.

Plus, it is complicated for scientists to observe ghost sharks, as they live in such deep waters.

However, we know that these unique sharks sense movement with club-like projections on their snouts, helping them find prey when swimming around in the dark. The open channels that this snout runs out are called lateral line canals. The cool thing about these organs is that they have the ability to sense weak electrical fields.

Though they are now on the cover of massive publications like National Geographic, it's clear that we still don't know enough about this species. With that said, we mustn't underestimate the importance of the deep ocean and its many species. Many experts believe that the deep ocean is home to a vast amount of the world's unknown biodiversity.

Keeping this ecosystem alive is very important, as it plays a significant role in the health and wellness of our planet.