With more than 200 known jellyfish species in the ocean, there's a lot to worry about when swimming in deep waters. The good thing is, most jellyfish are totally harmless. However, there are a select few with highly venomous stingers that could kill you if you're not careful.

So, what is the deadliest jellyfish in the world?

Come with us as we explore more!

The Most Dangerous Jellyfish

Some box jellyfish, including the Irukandji jellyfish, are incredibly tiny, measuring at just above .2 inches long. Clearly, they're not the biggest fish in the world, but the toxins that these deadly jellyfish release can be 100 times more potent than a cobra bite. 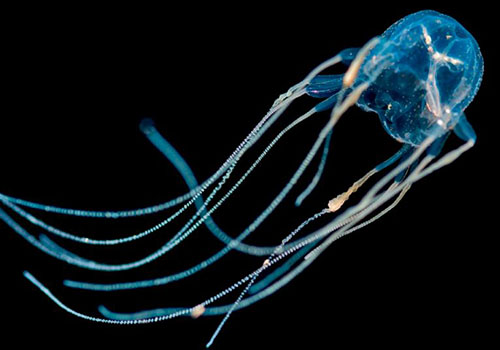 The sea wasp jellyfish is another species in the box jellyfish family and is one of the most deadly jellyfish known to man. A sea wasp jellyfish sting can kill up to 60 people with just one dart. Within each of its stinging darts lie over half a million microscopic stingers that cause extreme pain when inflicted on human flesh.

The Sea Wasp jelly, otherwise known as the Chironex fleckeri, is one of the most dangerous sea creatures. Not only is the poison it houses lethal, but its physiological features are nearly invisible, making them incredibly difficult to see. 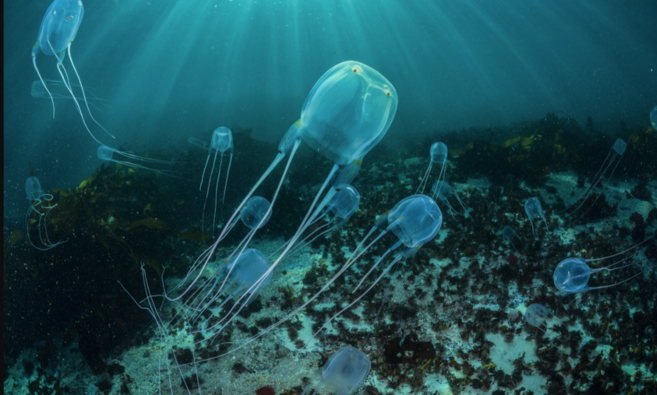 These jellyfish love hunting in shallow waters during the day, which is why you're more likely to come in contact with one at your local shoreline rather than out at sea.

The sea wasp jelly can kill a grown man with a dose of venom no larger than a grain of salt.

Even a single sting can cause unspeakable, burning pain. If not treated quickly, severe pain can lead to death from cardiac arrest.

Over the past 80 years, more than 63 Australian deaths have been attributed to these deadly creatures.

Despite being a bit smaller than the Sea Wasp, the Chiropsalmus Quadrigatus often referred to as the four-handed box jellyfish, the sting of this deadly jelly packs quite a punch. You'll often find this box jellyfish in the Indo-Pacific or the Western Atlantic waters.

The sting of this box jellies can cause acute pulmonary edema, respiratory failure, cardiac arrest, and death. However, one thing that distinguishes this jellyfish from its cousins is its physiology. On all four sides of its body, you'll find hand-like appendages from where it receives its name. 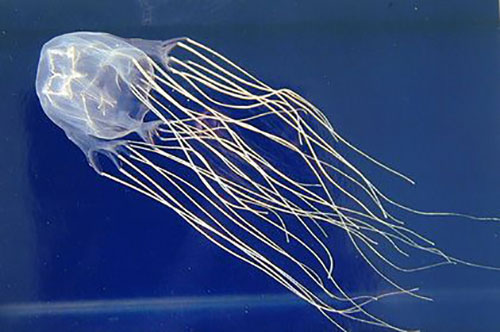 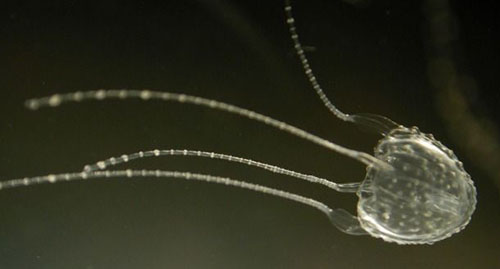 Though you could hold one on the tip of your finger, the Irukandji jelly does not mess around. At one time, scientists believed they only lived in Australian waters. However, we've recently found them in the waters of Japan, Florida, Thailand, and the British Isles.

In many cases, humans feel the burn of the sting, though they never see the jellyfish that stung them. The sting from this microscopic jellyfish causes what is known as Irukandji syndrome.

The victim will feel burning sensations in the skin for up to 12 hours, as well as symptoms like nausea, vomiting, muscle cramps, and excruciating stomach cramps.

Doctors note that Irukandji syndrome patients often beg for death, as they are in so much pain they believe that death is the only way out.

With that said, people often survive these stings if they get the proper treatment quickly.

The Morbakka Fenneri, which people often refer to as the "fire jellyfish," is known for its excruciating sting. This jellyfish floats about the calm, warm waters of Queensland and is one of the largest venomous jellyfish species on this list.

The fire jelly only measures about four inches long and has a bell body about two inches in diameter. The top of its bright pink body features massive protrusions that look a lot like warts.

Because of its clear visibility, it is usually pretty easy for humans to locate it if they've been stung. 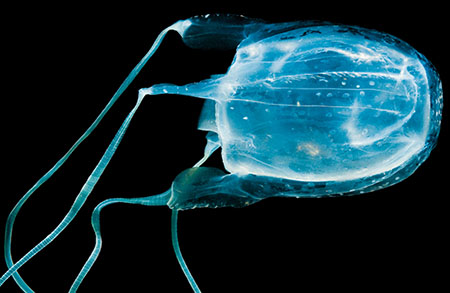 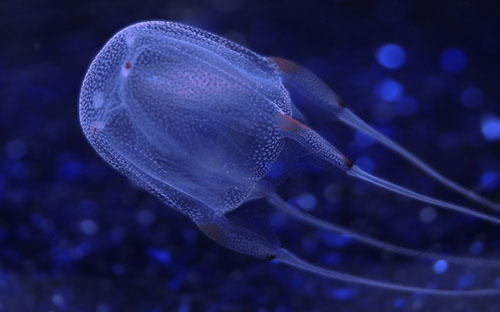 Another species of box jellyfish, referred to as the sea wasp jellyfish is the Alatina alata.

These jellies mainly swim off the coasts of Hawaii, though they can be found on the beaches of the Arabian Sea and Pakistan.

Compared to the other box jellyfish stings on this list, the sting of the Alatina alata is relatively mild.

Many people who have been stung say it's more like a bad mosquito bite, causing discomfort and unpleasantness.

Victims of this marine stinger typically apply hot and cold treatments or spray the affected area with vinegar to help the pain subside. However, the sting can cause Irukandji syndrome symptoms, which is why it's still important to seek medical attention if you are stung.

The cannonball jellyfish, otherwise known as the cabbage head jellyfish, has a dome-shaped bell with an overall cannonball shape.

You can find these jellies swimming throughout the northwest Pacific, the east-central Pacific, and the mid-west Atlantic.

They produce toxins that can put humans into cardiac arrest, which is surprising when you consider that they mainly feed on plankton!

To learn more about the jellyfish diet, head over to our recent article: What Do Jellyfish Eat? 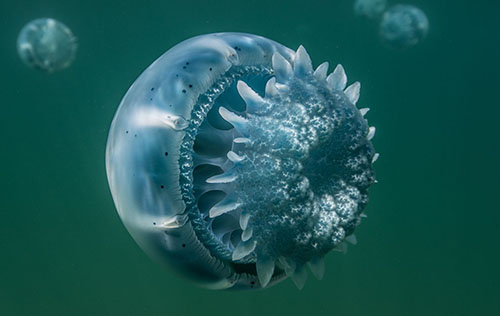 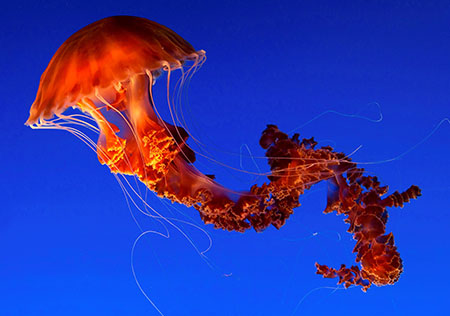 The Sea Nettle can be found throughout the open waters of the Indian Ocean, Atlantic Ocean, and the Pacific Ocean.

In terms of their physical characteristics, the way a sea nettle looks depends on its habitat. However, they often have golden-brown bells, growing up to three feet long.

Behind the bell, you'll find long tentacles that can grow up to 15 feet.

To hunt for prey, sea nettle will use stinging cells, which can cause extreme pain in humans.

The Lion's Mane Jellyfish is the biggest jellyfish known to man. Most of these jellies reside in the Atlantic and Pacific Oceans, though many make their way into the Arctic Oceans during their lifetimes.

Your average Lion's Mane Jellyfish can grow up to 6.7 feet in diameter.

While the stinging cells from a Lion's Mane Jellyfish can be extremely painful, they are not fatal. 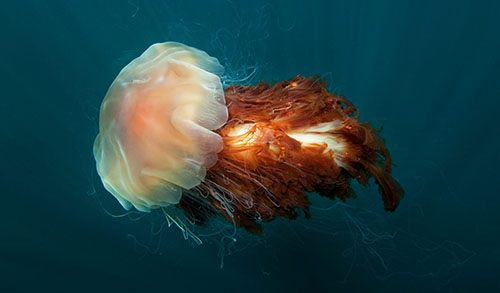 FUN FACT: One of the largest Lion's Mane Jellyfish ever found was 120 feet long!

How To Avoid Jellyfish Stings

The worst part about these dangerous creatures is that they can be nearly impossible to see because of their size. On the other hand, some species have tentacles that can reach up to ten feet. So, as you may have guessed, trying to look for them isn't the most effective method of avoiding a sting.

The best way to avoid stings is to research where box jellyfish live and avoid those waters if they've been in the area recently. Box jellyfish love tropical and subtropical waters. You can find them throughout the waters of Hawaii, Florida, Japan, South African, Australia, the Philippines, and California.

The good news is that their stingers aren't typically strong enough to pierce clothing, so wearing a wetsuit or bathing suit with tons of coverage can provide you with increased protection.

Are All Jellyfish Poisonous?

While all jellyfish produce toxins of some sort, not all of these toxins are dangerous for humans. Plus, with thousands of jellyfish species worldwide, from moon jellyfish to sea nettles and beyond, the severity of their poisons varies widely.