"Bro" has somewhat become its own language over the past few decades. If you're looking to better understand the slang used in skateboarding and surfing, then you've come to the right place.

Come with us as we dive into the world of bro-cabulary with the best bro words around.

Abroha - a mixture of "bro" and the popular Hawaiian term for hello and goodbye, "Aloha."

Example - "Abroha man! Hope you have a good time out in the surf!"

Example: "Gabe cracked his board on the way in. You should have heard the brofanity coming out of that boy's mouth!"

Abrocrombie and Fitch - a bro that acts or dresses preppy.

Example: "Rick came to the beach wearing a visor and a pink polo, what an Abrocrombie and Fitch."

Brommunication Skills - Knowing the right words to communicate with your bros.

Example: "Bro, we were out in the whitewash when John John hollered at me about a rip coming out? Nearly saved me! Pretty solid brommunication skills, eh?" 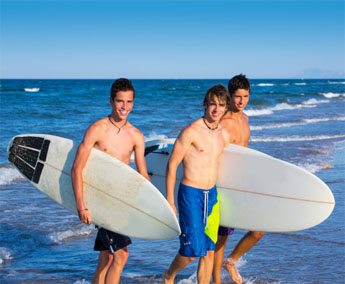 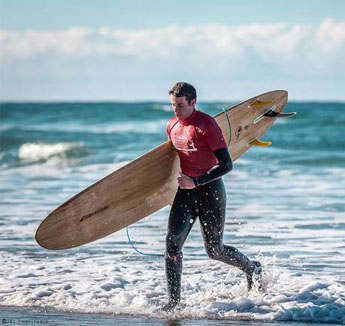 Albrotross - a bro that surfs with arms spread wide.

Example: "Whenever I see Matt flying down the line, he always has his arms out like an Albrotross."

Brobation - Getting permission from your sheila to hang out with friends or your other bros.

Example: "The word is that Joel is on brobation after washing the dishes. We gotta take this free man out tonight!"

Ambrodextrous - A bro that throws up a Shaka with both of his hands.

Example: "Nate hit me with that hard left-right, he must be ambrodextrous."

Bro-Bono - Your lawyer bro that loves to provide you with free legal advice.

Example: "Dude. I backed my van into this dude's BMW in the pier parking lot. Luckily my buddy Drake is a lawyer and said he'd represent me bro-bono."

Example: "There's nothing that makes a good time with the bros quite like some Slater Juice. Some might even call it an Afbrodesiac."

Example: "Oh man. Conner said he was gonna be at the office but Lindsey turned on her bro jack, only to find him partying at Wild Willie's."

Algebrah - A system of mathematics for determining the Hawaiian wave scale.

Example: "Brah, no way dat wave was a double-overhead! Use your algebrah dummy!"

Brofessor - A bro that can teach you everything you need to know about the world of surfing.

Example: "Morgan always has a way of scoring chicks when he teaches them how to surf. That bro might be one of the best brofessors in the game."

Anthbropology - the ancient study of bros.

Example: "I studied George Freeth, the Godfather of Modern Surfing, in my Anthbropology class."

Example: Aloha brah! You amped to chop it up out there today?

Bilbro Baggins - Any bro with a strong Lord of the Rings obsession.

Example: "John is such a Bilbro Baggins. He's seen Return of the King like ten times!"

Brohemian - A bro that is into art and hangs around unconventional, yet like-minded artists.

Example: "Mike and Brett are starting a folk band with their artist friends like a bunch of Brohemians."

Bro and Tell - A bro that starts bragging about something and just won't seem to stop.

Example: "Oh my god. Can someone tell Jack to stop going on about that tube? We've already heard his bro and tell speech like ten times."

Broincidence - running into some of your best bro friends when you didn't expect it at all.

Example: "Dude, what a broincidence. One minute Keenan starts talking about Jerry and the next minute he paddles up behind me!"

Broligarchy - A small group of bros that take control over a beach break.

Example: Willy, Jake, and Ethan are a total broligarchy. They won't let any other group hit that lefty by the pier."

Bro's Nest - A spot where the bros group up and chill.

Example: "What's up bro. Let's go back to my place, play some Sublime, and make some fish tacos on the grill!"

Broletariat - Friends that are part of the working class.

Example: "Dave is a hard-working broletariat like the rest of our surf buddies. He's been saving up for that board for five years."

Brofessional - A bro that has reached professional stature in the world of surfing.

Example: "I can't believe Julian got sponsored by Hurley. That man is an absolute brofessional."

Broem - Quotes or poems about surfing that your bros send you.

Example: "Please bro, my data is running out. Stop sending me these lame broems!" 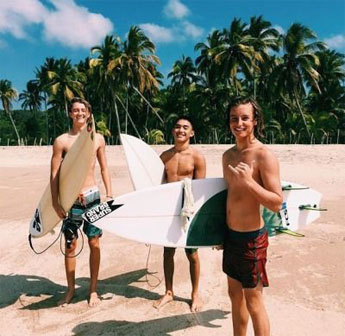 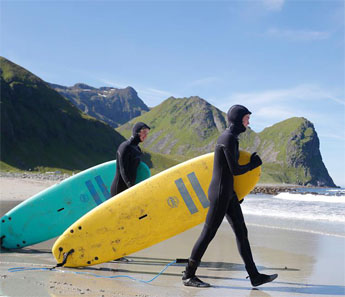 Broficient - Any bro that knows a lot of bro-related information.

Example: "Gus is always hooking the homies up with free wax and breakfast burritos. That is a sign of a broficient dude."

Brodephile - A bro that only seems to hit on young girls.

Example: "Craig is a registered lurker in Huntington Beach. She's too young for you bro!"

Brofiling - When a bro is discriminated against and there only crime is being a bro.

Example: "It's like every word that comes out of my mouth get me in trouble with the brolice. That's brofiling bro!"

Broker - A bro that is always trying to find a way to sell you something.

Example: "Bro, Andre keeps trying to sell me into something energy drink scheme. I can't think of a shadier broker."

Bromancing The Stone - A bro who you can always find repping Volcom.

Example: "From the hats to the shirts, Pete is one of my friends who's always bromancing the stone."

Using These Top Bro Words On The Daily

Thanks for sticking around and checking out our favorite list of bro words from the bro dictionary.

There is no better bond in life than the one you have with your bro. Every word on this list is perfect for communicating your deepest bro thoughts and feelings.

While these bro words might not score you any points in Scrabble, they're perfect to share with your bros for a good time.