If you've ever journeyed down the rabbit hole of pondering how incredible it is to live on a planet with such immense diversity, at one point, you may have said to yourself,

Wow, there are TONS of different animal penises on Earth.

Okay, maybe that's a stretch... but you've certainly wondered which animal has the longest penis!

Today, we're going to explore the gargantuan penis of the great blue whale as well as take a peek at 7 other weird animal penises.

How Big Is A Blue Whale Penis?

The average blue whale penis size is anywhere from eight to ten feet long, often with a diameter of about one foot.

Compared to the blue whale's body length, which is around 90 feet on average, it makes sense that they have the longest penis in the animal kingdom.

One unique thing about the blue whale penis is that it stays inside a genital slit on the whale's underbelly until it is put to use. But, oddly enough, their penises are very agile too.

With two strong muscles attached to the whale's pelvis, it has no problem maneuvering it's penis easily, altering its shape depending on the female it is mating with. 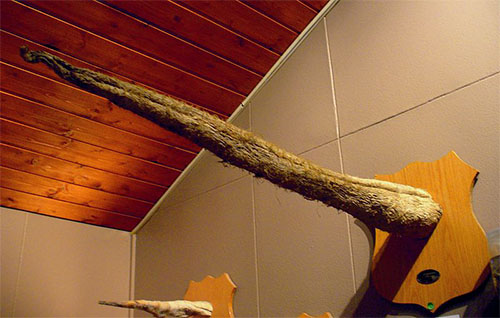 The largest penis in the animal kingdom can easily weigh a couple hundred pounds, but the largest blue whale penis ever recorded weighed 800 - 900 pounds!

FUN FACT: The largest penis of any adult land animal goes to the adult elephant, which can surprisingly grow up to six feet long on average.

Because they're the biggest whales in the world, it's no surprise that they've got giant testicles. Each blue whale testicle can weigh up to 150 pounds, about the same weight as the average adult male human. When having intercourse with female blue whales, they can ejaculate multiple gallons of sperm.

It's also worth noting that blue whales and other cetaceans do not have scrotums like most terrestrial mammalian males. A regular scrotum will lower when it reaches the ambient temperature to help keep its sperm viable. Because cetaceans never find themselves in ambient temperatures, they've found unique ways to compensate.

Blue whales have blood in their veins that they send directly to their testicles, warming up their sperm and helping it to remain viable for use. 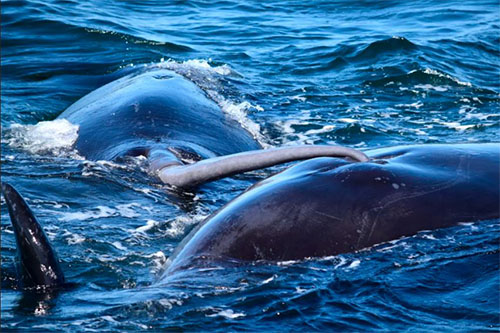 Blue whales mate and give birth during the winter once they reach sexual maturity, which typically happens anywhere between five and fifteen years of age.

Most of the time, blue whales spend their lives alone. However, once early August rolls around, they begin pairing up.

A male blue whale will follow a female for many weeks until they decide to mate. In our eyes, this is a bit like human dating.

Once in a blue moon, other male blue whales will show up to try and win over the female. During this meetup, the males will race to the top of the water so that the female can see who is the most physically fit.

While scientists have spent quite a bit of time studying the blue whale's mating season, they have yet to document blue whales' mating, as the process is relatively quick. The female blue whale has a long vulva and two nipples on each side of her body, which she uses to feed her babies. While they can go into heat any time of year, they often wait for the warmer season to mate.

The dolphin penis is a fibro-elastic prehensile penis, one of the most dexterous penises in the animal kingdom. As a result, a dolphin can easily grope and swivel its penis to find the entrance to a female dolphin vagina. Plus, dolphin penises come in a wide variety of shapes and sizes.

Scientists believe their penises are unique due to the intricacies of the vaginal folds found on female dolphin reproductive systems.

We still don't know much about cetacean mating behavior due to the ocean's vastness, however, we do know that male dolphins will often travel in packs of two to four, warding off competing dolphins so they can win over the females.

These males will surround a female dolphin, taking turns until one impregnates her. However, the female will use her uniquely combative vaginal folds to block certain males from penetration, giving her more say in the reproductive process.

Echidnas are extraordinary creatures, as they produce milk like other mammals, yet they lay eggs like birds and fish.

However, one of the strangest things about the echidna is its four-headed penis. Some might say that one simply doesn't cut it.

What's even stranger is that the echidna will use two heads simultaneously while the other two heads turn off.

Because they are such economical creatures, they have the ability to choose the half of their quad penis that they want to use. 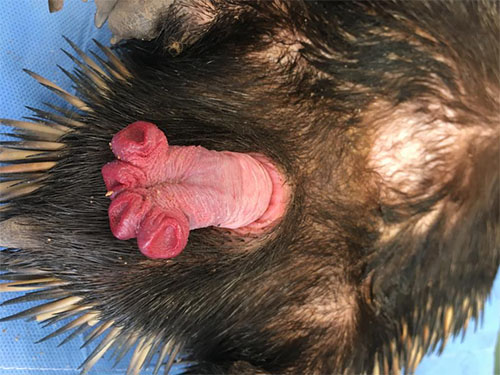 One look at the female two-branch reproductive system, and this two-headed penis entrance begins to make a lot more sense. Plus, similar to the rest of the echidna, its penis has a spiky coat made of sharp penile spines. The spines trigger ovulation to increase the fertilization success rate.

When the echidna isn't getting its jollies, its penis stays flaccid inside the body. However, when it needs to be put to use, it will come out of its prenuptial sac.

One thing separating Echnida's penile functionality from other terrestrial mammalian males is that its penis is solely used to mate. When it comes to defecation and urination, this animal uses a cloaca, a small opening on its body.

The Chromodoris Reticulata, one species of sea slug, has a spined penis that can only be used once in its lifetime. This single-use penis will extend just 1 centimeter out of the slug's body, even though it is three centimeters long. The good thing is, even once they're done using their penis, they have two more disposable penis segments hidden beneath the surface of their skin.

Scientists are unsure whether these tiny creatures can regenerate their penis once their sex life comes to a halt or if it is a one-and-done ordeal. It's also important to note that these tiny sea creatures are hermaphrodites, meaning that while mating, both of the partners will give and receive sperm.

Researchers speculate that the penile spines are there to remove any rival sperm from another male. If that's the case, it also makes sense that they choose to discard their penises, just like a doctor would if they had a dirty syringe. 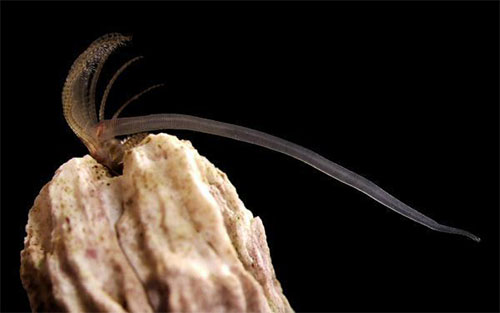 Of course, no one can beat the size of the erect blue whale penis.

However, the most impressive thing about barnacles is they have the largest penises compared to the size of their bodies.

A barnacle's genitalia at sexual maturity can grow up to eight times its body size.

Their large appendages come in handy, considering the fact that they are stationary creatures.

A barnacle can extend its large appendage out, dropping off sperm to other crustaceans nearby.

One exciting thing about barnacles is that their penises depend on the environment around them. For example, barnacles that live in rough water often have short, stout penises, while those that live in calmer water often produce longer, more slender penises.

Well-endowed would certainly be an understatement when discussing the two-headed penises of leopard slugs. Like barnacles, these two penises are massive compared to their bodies. Plus, they are a vibrant blue, making them impossible to miss.

Leopard slugs are also hermaphrodites, repping both male and female sex organs. During mating, they will create a bunch of slime to dangle from nearby branches, where they will inseminate one another. If that wasn't weird enough, one of the leopard slugs will eat the slime as a treat once copulation finishes.

Snakes, as well as their lizard counterparts, have dual penises called hemipenes.

These two penises are great for competition. During the mating process, male snakes will congregate in groups of anywhere from five to one hundred.

Every male in the group will compete for the same female.

The beauty of having dual penises, in this case, is that they can access the vaginal opening of the female from either side, doubling the success rate. 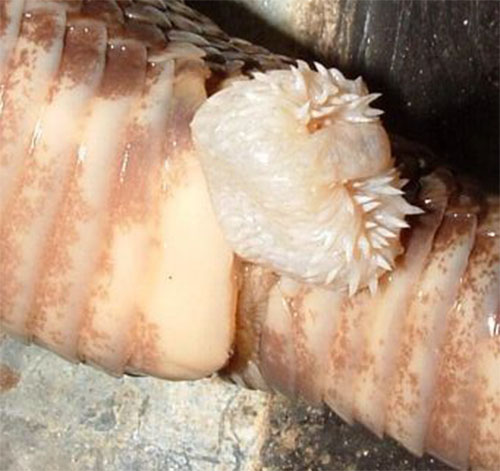 Alright, we're aware that no one likes talking about bed bugs, but with such impressive penises, we can't ignore them. You might not have guessed it, but the bed bug species has notoriously violent sex. In many cases, females will die during sexual intercourse because of the intense stabbing motions.

For this reason, scientists often refer to their intercourse as "traumatic insemination."

Most females don't have genital openings anymore, as males will simply stab through the outer cavities of their bodies to deposit their sperm. From there, the sperm migrates into the ovaries.

Male animals aren't the only interesting ones! We've got an equally shocking article on the Dolphin Vagina.