The magical Blue Glaucus, otherwise known by its scientific name, Glaucus atlanticus, is a small blue sea slug species that has a distinct and dazzling blue hue. In recent years, this blue ocean slug has garnered tons of attention on the Internet.

Come dive in as we explore everything you need to know about the incredible little Blue Glaucus.

The Blue Glaucus feeds on the Portuguese man o war jellyfish and will store and recycle those jellyfish stinging cells to use as its own protective device.

These blue dragons have unique hard disks and protective layers of mucus inside their skin that protect them from the Portuguese man o war stingers.

The Blue Glaucus defense system is then composed of these stinging cells, making them extremely dangerous to humans. 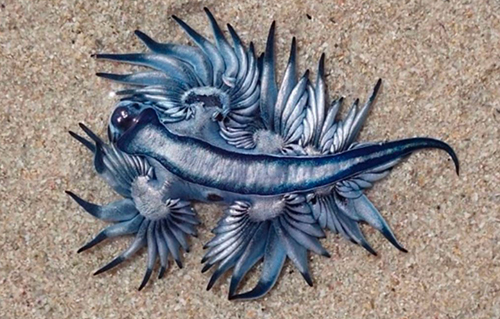 Sea slugs that steal defense mechanisms from other organisms are called aeolids, and the Sea Bunny Slug is also among this group.

If you pick up a Blue Glaucus atlanticus, you could end up with a painful sting that results in even worse symptoms, very similar to the sting from a Portuguese man o war.

Some of these painful sting symptoms include:

However, the Blue Glaucus alone is not a poisonous species like other sea slug species.

If a Blue Glaucus is unable to consume a Portuguese man o war jellyfish, then it will look for other pelagic creatures, including the violet snail or the Blue Button, the by-the-wind-sailor velella.

If the opportunity arises, the blue sea dragon will eat other Blue Glaucus atlanticus.

FUN FACT: Even after a blue dragon dies, its venom will remain active. If you run across one of these little creatures on the beach, it's a good idea to keep this in mind!

The Glaucus atlanticus blue sea slug has a countershading coloration, which has a silver-grey dorsal slide, a dark and pale blue ventral area, and a head with dark blue stripes. Because this silvery grey-blue Glaucus floats just beneath the bright sea surface, its unique coloration gives it a valuable form of camouflage, protecting it from other predators.

Beyond its color, the Blue Glaucus has a flat, tapered body shape with six appendages branching off of it, very similar to the way fingers branch off of a hand. These slender appendages are where their stinging cells sit, which is why they use them for hunting other prey.

If a Blue Glaucus feels threatened, it will use these stingers to protect itself.

Perhaps one of the most terrifying elements of this open ocean creature is its radula teeth, which resemble the serrated edge of a knife.

While they often float around with the ocean currents, they also have the ability to move on their own. With their appendages, they can propel their bodies through the water. They drive their bodies using a combination of the millions of tiny hairs on their flesh along with small muscular contractions.

Where Do Blue Glaucus Live? 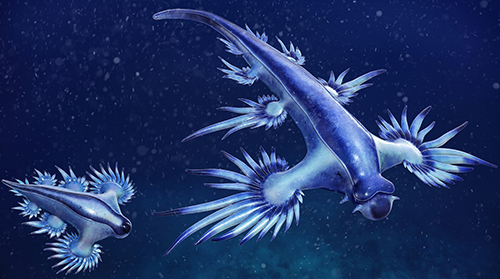 The Blue Glaucus atlanticus is a pelagic fish, meaning it lives in the open ocean, neither close to the shore nor at the bottom of the ocean.

You can find them all over the world, living in the Atlantic, Pacific, and Indian Oceans.

Scientists are now beginning to realize that the Blue Glaucus habitat is starting to expand.

Many reports are surfacing of the Blue Glaucus atlanticus appearing in habitats that they typically don't belong, including Australia's east and south coasts, European waters near Mozambique, and the coasts of South Africa.

Typically, the blue dragon likes to move above the ocean's surface, floating upside down and using the tension of the ocean to move. To maintain buoyancy, blue dragons will swallow air bubbles, storing them in their gas-filled sac. They then allow the ocean waves and winds to carry them from place to place.

Sometimes, blue dragons float down to the ocean floor and rest on the sand.

Unfortunately, winds will often carry them to places they can't live, such as offshore locations where they get stranded and die. For this reason, many vacationing beachgoers will find blue angels on the sand.

Don't underestimate the blue dragon because of its small size, as it is a very dangerous little creature.

Often, the blue dragon will reach a size of around three centimeters when it matures, weighing no more than 100 grams.

What Do Blue Glaucus Eat?

This ocean drifter looks very much like a jellyfish and has a dangerous reputation.

Not only does the blue angel eat the man o war, but it also recycles its stinging cells as we discussed above.

FUN FACT: Groups of blue dragons floating together are known as blue fleets. Beachgoers must be careful of blue fleet encounters, as they can often wash up on beaches, stinging unsuspecting victims.

How Long Does The Blue Glaucus Live?

The Blue Glaucus will live anywhere between one month and one year.

One unique detail about this little sea slug is that it is a hermaphrodite.

While it produces its own sperm and eggs, it must still mate with other slugs to produce eggs.

Similar to the way they find food, they will float along temperate and tropical waters until they find a mate.

To avoid getting stung by their partners, they must engage in the act of reproduction with extreme caution. 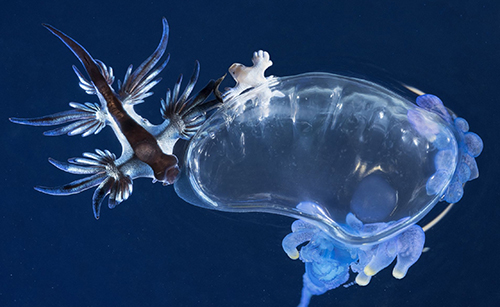 To do this, they use lengthy, S-shape bends on their penis that helps them stay safe during the mating process. During this process, the female will release anywhere from 12 to 20 eggs.

One other unique thing about the Blue Glacus' reproduction habits is that they often lay eggs in the carcass of their preferred prey. If not their prey, they will leave their eggs on other large masses nearby.

Can a Blue Glaucus Kill You?

While it might not be the answer you want to hear, the Blue Glaucus CAN kill a human being. With concentrated venom, these creatures have a far more potent sting than your average jellyfish.

Scientists have the ability to keep an eye on these blue fleets, which is why they're able to warn beachgoers of their potential presence.

For example, in 2015, researchers were able to warn people of this species popping up on shorelines all over Australia. And in 2020, blue dragons began appearing on the shores of Texas, which is why people were advised to stay away.

If you are stung by a blue dragon, it's best to get it treated at a hospital instead of at home.

To find out what other ocean dwellers you should avoid, head over to our Most Dangerous Sea Creatures page!

As with any other sea creature, conservation status is something to consider. Climate change has been a major threat to the blue dragon species. With the atmospheric CO2 increase in the past decade, ocean acidification has become a major issue.

If they are unable to find food, they will cannibalize themselves. In fact, a recent study found that 42% of blue dragons had remnants of their own species.

They are currently on the IUCN Red List as endangered species, even though the exact number of these creatures is very difficult to calculate due to the amount of them found around the world.