Where are the biggest waves in the world found? Who rides these massive walls of water? How do you even attempt to surf a wave worthy of a Guinness World Record?

The average human fears for their life when faced with giant waves. However, there are a select few who make it their life's work to visit notorious big wave spots around the world in search of the biggest wave ever.

Read on to discover where the official world records are being set and who's credited with riding a 100 foot wave.

What Is The Biggest Wave Ever Surfed?

Where Are The Biggest Waves Found?

Big wave surfing is no longer reserved for Hawaii despite having originated at spots like Waimea and Jaws. The biggest waves in the world are located all over the planet, with some of the most iconic being Maverick's in California, Shipstern's Bluff in Tasmania, and Aileen's in Ireland.

However, for truly giant waves there is one place that stands out above all the rest. For the past few years, Nazaré in Portugal has been the go-to place to set world records for wave size. The orientation of the bay and its bathymetry (bottom shape) funnel in the swell and amplify the wave height considerably. That's why Nazaré is now a permanent fixture on the World Surf League Big Wave Tour.

How To Catch Big Waves

The bigger the wave, the faster it moves through the water. Catching a wave requires the surfer to reach the speed of the wave so they get picked up by it. In big wave surfing, there are two approaches to this. The more traditional way to access big waves is to ride a type of long, narrow surfboard called a gun.

These are specifically designed for big wave surfing; the length and shape help generate enough paddle speed to catch the wave and help cut through any chop on the wave face during the ride.

The wave is caught by the same method as surfers use in smaller conditions, simply by paddling with the arms to get up to speed with the wave. 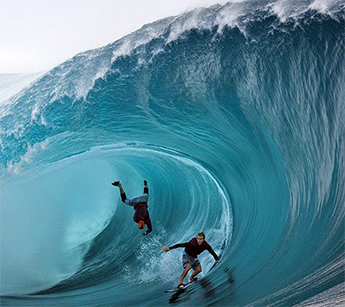 In professional surfing circles, some big wave enthusiasts only consider records for riding the biggest wave to be valid if the surfer catches the wave by paddling.

Other big wave surfers prefer a modern, tow-in approach. Strapped onto a much smaller board, they use a similar rope to those used for waterskiing to ride behind a jetski. The ski will tow the surfer onto the face of the wave, generating plenty of speed. This method allows the surfer to ride even the biggest waves more aggressively, as the shorter board can turn much faster than a cumbersome gun.

What Is The Biggest Wave Ever Surfed?

The official Guinness World Record for the largest wave ever surfed is currently held by Brazil's Rodrigo Koxa.

The 80-foot wave he caught on November 8th, 2017 at Praia do Norte, Nazaré, beat Garrett McNamara's previous record (set at the same break in Portugal) by just 2ft.

The women's record is held by another Brazilian, Maya Gabeira, whose 2020 Praia do Norte effort was verified from analysis of the footage at 73.5 feet, breaking her own record for biggest wave ridden by a woman. 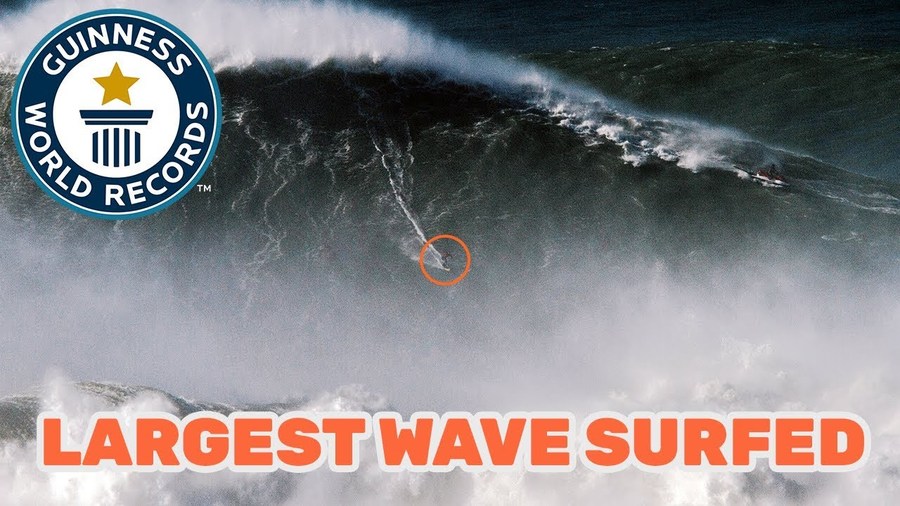 Although Guinness adjudicators award world record certificates and are generally considered the arbiters of "official" world records, the sport of surfing has its own award for the biggest wave of the year, presented at the XXL show.

The XXL Biggest Wave award is handed out each year to the surfer who catches the biggest wave, alongside awards for Best Ride, Best Tube, and several other categories.

Some recent contenders for the award are almost certainly bigger than the Guinness World Records mark set by Koxa, although they can't be officially accepted by Guinness due to the way measurements were estimated from videos of the rides. In 2013, both Garrett McNamara and Carlos Burle rode massive waves around 100 feet in Portugal, making them the unofficial joint holders of the unofficial biggest wave bragging rights.

For a moment, in 2014, Frenchman Benjamin Sanchis stood atop a 108ft monster in Portugal with the opportunity to make his own mark on big wave riding history. Unfortunately, he was unable to complete the ride, falling down the massive face as he attempted to maneuver over some chop on the surface. The XXL Awards couldn't consider the attempt for the Biggest Wave award but Sanchis did win the nomination for "Wipeout of the Year".

The process of having a world record certified can take a while due to the verification process. On October 29th, 2020, Portuguese local António (Tony) Laureano took off on a bomb set at Praia do Norte on the west coast of Portugal and surfed a wave he instantly knew was the biggest of his life.

When the 18-year-old and his father reviewed the footage they realized the wave had a good chance of significantly improving on Rodrigo Koxa's Guinness World Record. Rather than wait for the World Surf League's verdict, Tony and his dad made an open plea for independent verification.

University of Lisbon's Faculty of Human Kinetics (FMHUL) agreed to take on the challenge. Using their own specialized software, a team headed by Miguel Moreira eventually arrived at a figure of 101.4 feet which, if ratified by the WSL and Guinness World Records, would make the youngster the new record holder and the first human to (officially) ride a 100+ foot wave.