Almost any angler can tell you that bluefin tuna is one of the largest fish species in the world. However, even professional anglers are often surprised by just how massive these sea creatures can get!

What is the largest tuna ever hooked?

Come dive in as we explore more!

The prize for the biggest Atlantic bluefin tuna ever caught goes to Ken Fraser. On October 26, 1979, Fraser set out with fish captain Eric Samson on a small fishing trip in Port Hood, Nova Scotia.

After spending more than 10 hours dehydrating on the boat, the world record bluefin weighed 1,498 pounds!

The most incredible part of the story is that Fraser was able to reel in the massive beast in only 45 minutes. That's really saying something, as these are some of the fastest fish in the ocean.

How in the hell do bluefin tuna get this big?!

Well, bluefin tuna have a pretty insatiable appetite with a diet that one can only describe as "wide-ranging." In all reality, bluefin tuna will eat just about anything that comes in contact with them—naturally, bluefin tuna feed on crustaceans, squid, eels, and smaller fish. In many ways, bluefin tuna are apex predators. 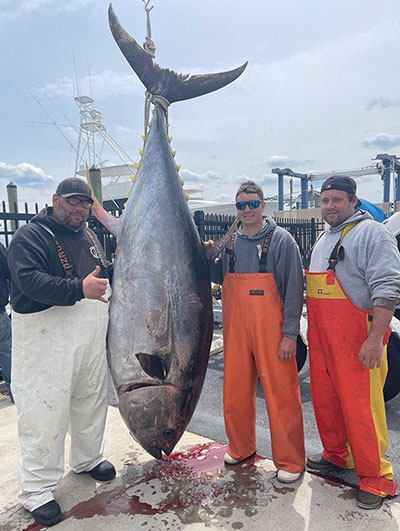 When you consider how much bluefin tuna eat, it's no wonder they get so much larger than their cousins.

Ken's massive catch also made it onto our Biggest Fish Ever Caught article. Head over if you'd like to see where he ranks compared to the other record breakers.

The biggest yellowfin tuna ever caught was 427 pounds. This massive fish was caught off the coast of Cabo San Lucas back in 2012 and is one of the few yellowfin tuna of this size caught purely with rod and reel.

The world record blackfin tuna was caught by Captain Matthew Pullen off the coast of Marathon, Florida, back in 2006. The tuna weighed 49 pounds. The previous record came from Virginia's Robert Spencer, who caught a blackfin tuna that weighed 39 pounds.

Blackfin tuna don't grow nearly as large as Pacific bluefin tuna, so while the record may not seem impressive in relativity, the angling community was blown away.

At age 15, angler Stanley Gillies broke the world record for the largest bigeye tuna catch with only a fishing rod. This Atlantic bigeye tuna weighed in at a whopping 325 pounds! 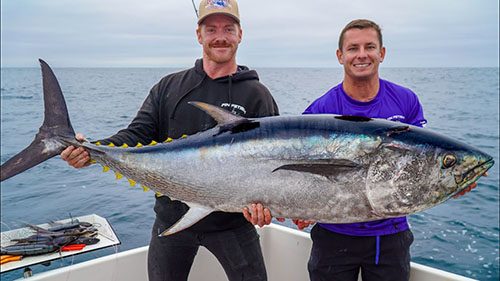 The world record catch for albacore is a 90-pounder that was caught off the coast of Santa Cruz in California back in 1997.

Brian Evans made the world record catch for the largest skipjack tuna ever caught while fishing off the coast of Baja, Mexico, back in 1996. While these aren't the biggest fish in the world, Evans' tuna weighed in at 45 pounds and 4 ounces.

How Do You Measure a Record-Breaking Fish?

The girth is measured from the widest portion of the fish's body.