There is no animal in the ocean more captivating than the octopus. Beyond the fact that the octopus is one of the largest species in the sea, it is also one of the most recognizable. With over 300 octopus species in the world thriving in just about every ocean habitat you can think of, there are lots of things to learn about these eight-legged, soft-bodied creatures.

We know that octopuses come in many shapes and sizes, but which one is the largest?

Come dive in as we explore the largest octopus on Earth, as well as some of the runner-ups.

Biggest octopus in the world

The Giant Pacific Octopus, found in the northern Pacific Ocean around the United States as well as in Japan, is the largest octopus species on Earth. However, the ocean's largest specimens have also been sighted around Alaska, Russia, British Columbia, and the Korean Peninsula.

The largest Giant Pacific Octopus ever found in the ocean measured 30 feet long and weighed around 600 pounds!

However, an average adult giant Pacific Octopus measures around 16 feet in length and weighs around 110 pounds. You may be surprised to find out this is actually quite small when compared to squid!

Similar to other octopus species, the Giant Pacific Octopus is extremely intelligent. Many have been found mimicking other species and performing human actions including opening jars. 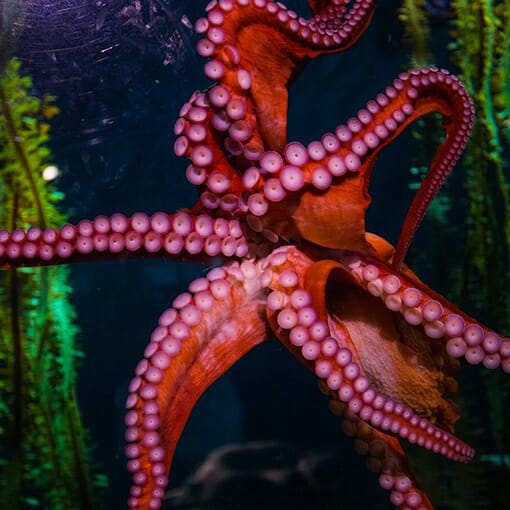 Beyond the fact that Giant Pacific Octopuses are the largest octopus species in the ocean, you would be able to easily recognize one thanks to their reddish-pink color. Because the Giant Pacific Octopus does not have a protective outer shell like other ocean creatures, it has to use its camouflage abilities to protect itself. However, similar to other octopuses, this species has blue blood due to the copper-rich protein that flows through its bloodstream.

In terms of diet, this largest known species is not picky. You can find the Giant Pacific Octopus eating lobsters, fish, scallops, snails, abalone, crabs, shrimp, and clams. This massive octopus will even eat other octopuses and small sharks like the spiny dogfish. They've even been seen eating birds when they get the chance. These massive octopuses have anywhere from 2,140 to 2,240 suction cups on their vast arms, which provides them with an extreme sense of smell and taste, as well as an exceedingly powerful grip.

Female Giant Pacific Octopuses will lay more than 74,000 eggs in their lifetime, though they will die very shortly after they breed. Before they die, mother giant Pacific octopuses stay with their eggs for around seven months to watch over them full time. She doesn't even venture out to hunt prey. Because the females spend so much time watching over their eggs, scientists often have difficulty tracking the giant Pacific Octopus to gather data about population numbers.

According to National Geographic, one of the largest Giant Pacific Octopuses ever found had an arm span of over 30 feet and weighed well over 600 pounds!

If you now find yourself wondering "are octopus dangerous?" we'll let you in on the alarming answer! 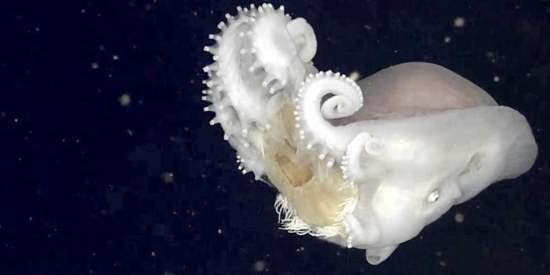 The seven-arm octopus (Haliphron atlanticus), despite the name, possesses 8 arms just like any other octopus.

Its name comes from the fact that it uses one of its arms to fertilize eggs.

Among the common octopuses, this is the second-largest, coming in second to the giant Pacific.

It can reach lengths of over 11 feet and reaches a maximum weight of 165 pounds.

Most seven-arm specimens come from the Atlantic Ocean, though there have been many sightings of them in the South Pacific ocean.

This species is very similar to its cousin, though you can distinguish them by the two white spots found on their heads and the frill of merged papillae found across their bodies.

On average, frilled giant Pacific Octopuses can grow up to 16 feet long and weigh 110 pounds.

They're often spotted off the southern coast of Alaska and around Prince William Sound. 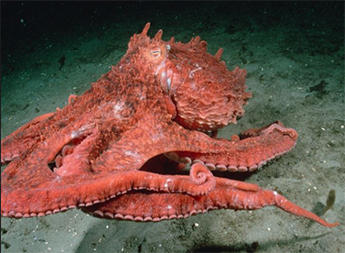 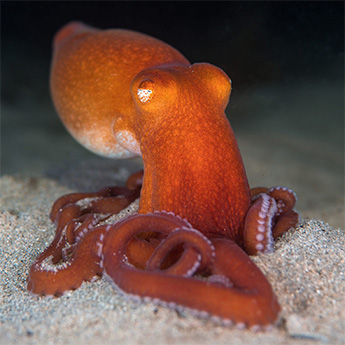 The Southern Giant Octopus can measure up to six feet long and typically weighs around 25 pounds.

You will often find this species of octopus wading around the shallow and subtidal regions of South African waters.

The Maori Octopus is a mid-sized octopus found around the waters of Southern Australia and New Zealand.

The Maori Octopus has white spots on its orange-brown body and is typically covered in unique patches that give it a spiky look.

Many fishermen sell the Maori Octopus to restaurants to be eaten, or use them as bait for fishing. 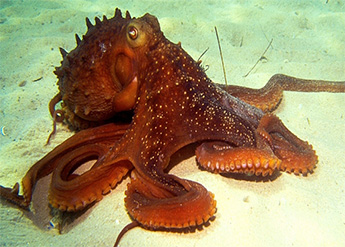 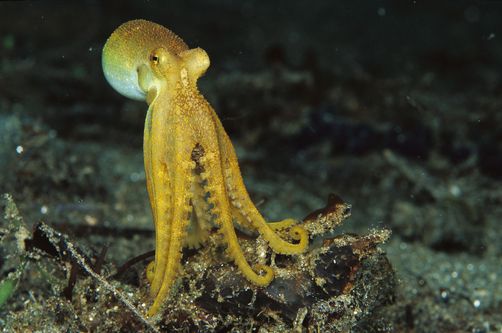 The Yellow Octopus is one of the ocean's most mysterious creatures, which is why scientists have such a difficult time determining their average size.

However, one of the largest yellow octopuses ever measured was around 4.6 feet long and weighed 11 pounds.

While fewer yellow octopus sightings take place than the others on this list, scientists say they are abundant in New Zealand's waters.

They typically measure around 3.3 feet in length and weigh just under 9 pounds on average.

The Southern red octopus is easy to distinguish thanks to its paddle-shaped papillae and striking red coat.

You will often find this species around the coastlines of Argentina and Chile. 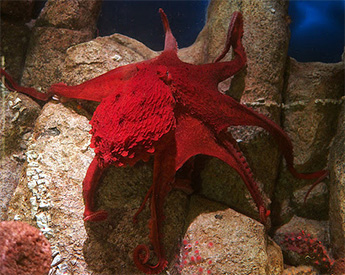 The common octopus (Octopus vulgaris) is the most well-studied octopus on Earth and can grow to be anywhere from 1-3 feet in length with an average weight of around 6-22 pounds.

You can find this species worldwide, many of which enjoy foods like mollusks, crayfish, and crabs.

Similar to other species, the common octopus has three hearts and nine brains.

If you enjoyed this article about the biggest octopuses, then check out our largest sea creature and deadliest jellyfish articles!