Did you know that the jellyfish is the world's largest animal?

This fact comes as a surprise to many people, as we think of jellyfish as cute little sea creatures that float daintily around in the deep blue. However, these amazing animals are much larger than you might think.

Today, we're going to dive in deep and explore one of the ocean's most incredible specimens, the jellyfish.

What Is The Biggest Jellyfish In The World?

The largest jellyfish in the world is the Cyanea capillata, otherwise known as the Lion's Mane Jellyfish. These particular jellyfish have been known to grow longer than a whale! The biggest jellyfish ever found was in 1870 off the coast of Massachusetts. It was 36.5 meters long and 2.3m in diameter.

The lion's mane jellyfish is the largest in the world. Most of this jellyfish's mass comes from its massive tentacles, which dangle off of its body and resemble the mane of a lion. Unfortunately, the lion's mane jelly can only be found in cold waters and have a lifespan of one year.

More often than not, you will find the world's biggest jellyfish in colder water, especially throughout the Irish Seas, English Channel, and Scandinavian waters. But, strangely enough, lion's mane jellies aren't the best swimmers, which is why they often hop on ocean currents to travel from point A to point B. 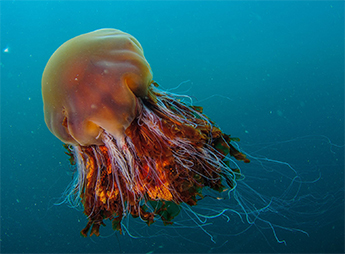 As this species of jellyfish moves from one place to the next, they will capture prey with their long tentacles.

When these jellies get old, they will often retire to shallow shielded bays before dying.

Yes. The lion's mane jellyfish uses a powerful sting to catch its prey, including small crustaceans, small fish, and other jellyfish.

Can a lion's mane jellyfish kill you?

If a lion's mane jellyfish stings you, don't worry. While their stings can be excruciating, they are rarely fatal.

In fact, one of the most dangerous jellies in existence is also one of the smallest. The Irukandji jellyfish is a box jellyfish that only grows up to 20mm, though its stinging cells can cause chest pain, headaches, vomiting, anxiety, and death.

The Chironex fleckeri, otherwise known as the Australian box jelly, and which we will discuss later is also potentially fatal and is estimated to have killed about 100 people within the last century. That's why this species made it onto our most dangerous sea creatures list!

Where do lion's mane jellyfish live?

Most lion's mane jellyfish live throughout the North Pacific and Arctic Oceans in the cold waters between Washington and Alaska. However, it isn't uncommon to find them in the North Seas, Irish Seas, English Channel, and Scandinavian waters.

What does a lion's mane jellyfish eat?

Lion's mane jellyfish will typically eat small fish or crustaceans, though many are known to eat other smaller jellyfish.

We've got an entire article dedicated to this topic. Check out "What Do Jellyfish Eat" to discover more about their diet as well as the unique way in which they digest their food!

The largest lion's mane jellyfish recorded was over 120 feet in length, which is larger than most blue whales!

The scientific name for the lion's mane jellyfish is Cyanea capillata.

6 Other Species Of Big Jellyfish 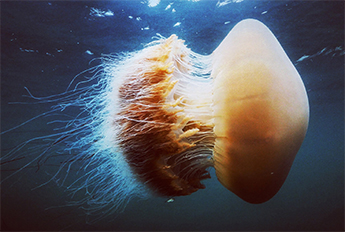 Though the massive Nomura's jellyfish are born at about the size of a pinhead, they can eventually grow to reach over two meters wide and over 200 pounds!

On average, the diameter of a fully grown Nomura's jellyfish is greater than the average height of an adult human male.

This jellyfish gets its name from a fishery expert named Kan'ichi Nomura, who found the jellyfish in December of 1921 and sent it off to be studied.

You'll most often find these jellyfish in the seas between Japan and China, including the Yellow Sea and the East China Sea.

FUN FACT: Because Nomura's Jellyfish reproduce at such a rapid rate, people will often catch them and dry them out to either eat them as delicacies or make ice cream.

The Pink Meanie wasn't discovered until 2000 when scientists first observed them swimming off the Gulf Coast in Mexico.

At first, observers thought they were the Drymonema dalmatinum, but later realized these were completely different species altogether after closer observation. The Pink Meanie jellyfish was named after Ron Larson, a scientist that first studied these unique jellyfish after finding them in the Caribbean.

One of the unique things about the Pink Meanie is its taste. When they get to be full-grown adults, they begin feeding on moon jellyfish. 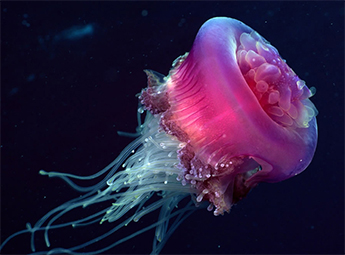 When they come in contact with a moon jelly, they will open their tentacles wide and devour them whole. Pink Meanies have small arms, most often referred to as "oral arms," which can be found on each side of their tentacles. They use these arms to aid their digestive system. 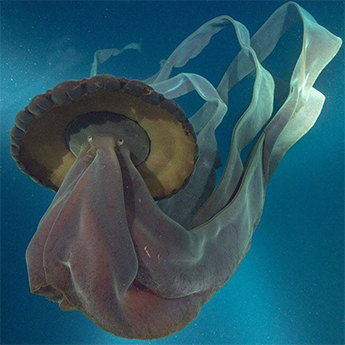 The Stygiomedusa gigantea is one of the most elusive creatures of the deep. In the past 100 years, this unique jelly has only been seen around 100 times. Most people see these massive jellies along the western coast of the United States and throughout the waters of Japan. To this day, this species of jellyfish has been found in every ocean except for the Arctic Ocean.

The Stygiomedusa gigantea is one of the largest invertebrate predators in the world, though, unlike other jellies, it has four large oral arms instead of tentacles. These oral arms can extend to six feet in length, perfect for preying on small fishes and plankton.

Thanks to its reddish-brown look, it blends nicely in the darkness of deep water without reflecting light.

If you're swimming or boating around the British seas, you might end up swimming side by side with a barrel jellyfish.

These are the largest jellyfish in the British sea, though most people that encounter them find them dead as they wash up onto local shores during the summer. It's easy to find barrel jellyfish swarming throughout Britain's coastal waters during the spring, though hundreds of them begin washing up on beaches by June.

Beyond the British Isles, you can also find barrel jellyfish off the coast of South Africa and throughout the Adriatic and Mediterranean seas. 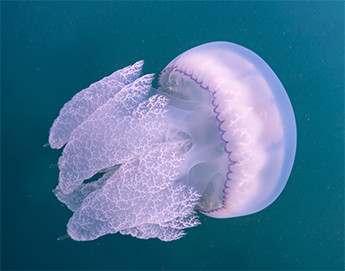 People often refer to them as "dustbin jellyfish," as they usually grow the same diameter as a dustbin lid. When it comes to food, they will often stick around warmer water to wait for inshore plankton blooms. The beauty of the barrel jellyfish is that it is very easy to identify. All barrel jellyfish have eight long tentacles and a mushroom-shaped body, though they can vary from blue to green to brown in terms of color. 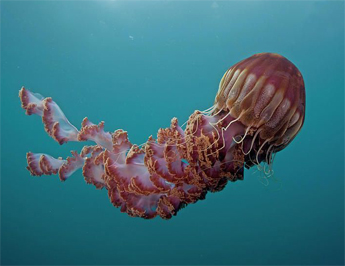 The black sea nettle, sometimes referred to as the pacific sea nettle, can grow to three feet in diameter with tentacles that stretch over 25 feet in length. Unfortunately, it's pretty rare to catch one of these jellies in the wild, and no one had classified it as a species until 1997.

Whenever you see a black sea nettle, you will most likely see a Pacific butterfish too.

When Pacific butterfish feed on plankton that the jellyfish collect, they will hide in the bells of the jellies to avoid prey. While a sting from a black sea nettle can be excruciating, it is not lethal.

The largest jellyfish ever recorded in the Australian Box species was 19" in diameter. Many people refer to the Australian box jelly as the "sea wasp," as its stinging tentacles makes it one of the most dangerous sea creatures in the world.

In just under three minutes, a sting from a box jelly can cause paralysis, cardiac arrest, and death, making it the world's deadliest jellyfish!

Although the mortality rate is not precise, it is estimated that the Chironex fleckeri has caused over a hundred fatalities within the last century. 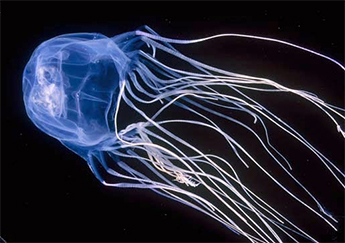