Goldfish were discovered in Eastern Asia over a thousand years ago when the Chinese began breeding wild fish, such as carp.

Of course, as breeding goes, mutations cause evolution, which can cause all kinds of unique anomalies. Thus, the largest goldfish known to man was born.

So, just how big was this goldfish?

Come dive in as we take a look!

If the suspense wasn't enough, we want to take you down a line of large goldfish before we get to the largest goldfish ever caught. Here are the top 5!

Goldie was one of the largest goldfish ever known. While he is not around anymore, before his death, he reached up to 2 pounds in size and was nearly 16 inches long!

His owner was miss Ada Shaw, an 83-year-old widow who took care of Goldie in a way that only an incredible owner could.

Ada said Goldie had a very bossy personality and liked to stay as busy as possible.

Over the course of Goldie's life, Ada fed him two meals per day and gave him warm water to enjoy. 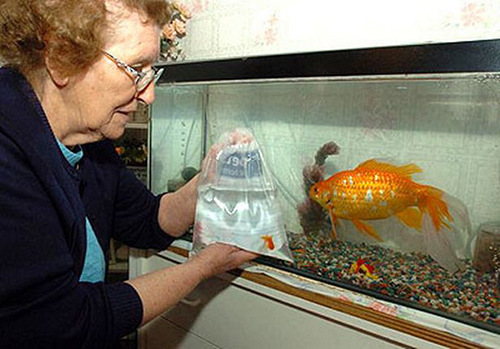 What was unique about Goldie is that he was only an inch long when Ada first purchased him from her local pet shop, which just goes to show how much love and care can have a positive impact on an animal's life. 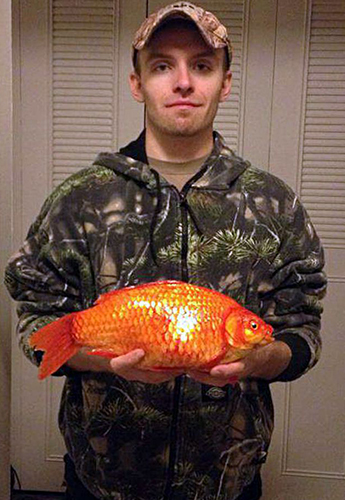 While out fishing one day, Mike Martin felt a powerful tug on his line.

His first instinct was that he'd reeled in a big perch.

However, what he wasn't expecting was a giant goldfish.

After getting his dad's advice after an excited phone call, Martin put his goldfish in a bucket and brought it home.

Mike ended up contacting DNR to check if he'd made a record-breaking catch.

However, he never ended up hearing back.

He had also planned to mount this fish on his wall, as he never knew if he'd catch another one this big.

Each year, scientific researchers get together to trawl Lake Tahoe's water in search of invasive species.

In 2013, they happened upon about 15 giant goldfish in a school near the lake's corner.

The researchers believed these huge goldfish were procreating.

The idea that these fish were mating with one another was concerning, as goldfish are an invasive species in this area and can do harm to the local ecosystem. 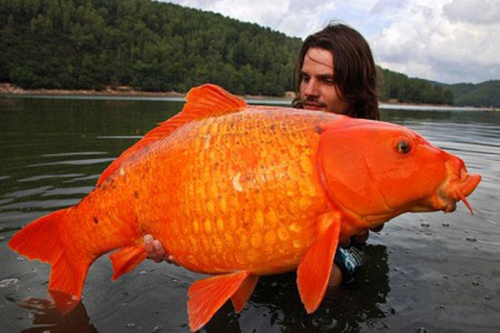 Because these fish are invasive species, they can cause major harm to ecosystems in which they don't belong, cutting resources for other species. For this reason, introducing an invasive species like goldfish into the wild Lake Tahoe ecosystem may result in fines of $5,000 or more. 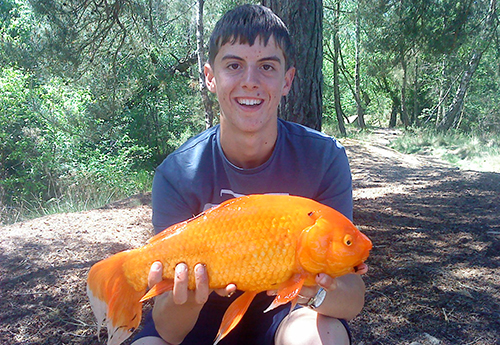 Nick Richards caught this one-of-a-kind goldish while out on Dorset Lake in England. While out fishing for common carp, Richards noticed a bright, shimmering light come across the end of his line. While he believed he had captured an unusually large carp at first, he realized that he had actually caught a massive goldfish, which he believed was once someone's pet.

After measuring and photographing Billy the Goldfish, Richards released him back into the lake. Richards believes that he will stumble upon Billy during a future fishing trip and that he will have grown bigger!

The largest goldfish caught was Lois Chilvers' goldfish, which was caught in Kent, England in 2017.

Though the Guinness Book of World Records does not actually recognize this large goldfish as the largest goldfish caught in the world, it did get the record for the biggest caught in the UK.

While out on a fishing trip with her father Gary at Chase Lake, she reeled in this prized specimen.

In fact, Lois ended up catching two of these massive fish.

Her father believed they were once pets who had grown too large to be kept in captivity, which is why they were released into the wild. 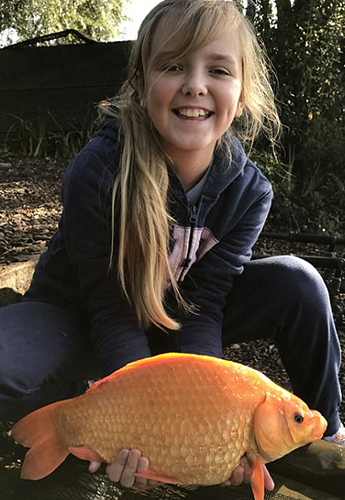 Do Goldfish Have Teeth?

Yes, strangely enough, goldfish have teeth! However, while we think of teeth on gums, as found in human mouths, goldfish teeth lie at the back of their throats. Very similar to sharks, goldfish will lose their teeth and regenerate them throughout the course of their lives.

How Long Do Goldfish Live?

The goldfish lifespan spans from about 10-15 years on average. However, while most goldfish never make it past 15, some unique species can live up to 30 years if taken care of properly. The unfortunate reason that most goldfish don't live this long is that their owners don't provide them with an adequate living environment or food.

Can You Eat Goldfish?

Yes, you can eat goldfish. However, the reason that you don't often see them on menus like tuna, tilapia, salmon, or trout is that they are not the tastiest or healthiest fish around. If you want to find out what a goldfish tastes like without eating one, you can try some of its pellets, as a fish only tastes like what it eats!

So you know, pellets are made out of squid meal, fish meal, earthworms, and other additives that aren't very appetizing.

How Big Do Goldfish Get?

The average goldfish size is about 1-2 inches. However, in the wild, goldfish can get up to around 12-14 inches. Some owners tend to throw their pet goldfish in lakes if they get too large.

Where Are Goldfish From?

More than a thousand years ago, the Chinese began breeding wild carp. Over the years, breeders began noticing some of the fish had bright orange, gold, and silver scales on their bodies.

The Chinese continued "developing" the goldfish until the 16th century, before the Japanese decided to take over, breeding the Tosakin species that we're familiar with today. (The Tosakin has a single, undivided tail fin).

It wasn't until the 17th century that this fish was introduced to Europe before making its way into American aquarium environments in the 1850s.