The topic of world record catfish weighs on the minds of catfish anglers everywhere.

After all, who wouldn't want to snag a world record catfish?

With three massive species of catfish in the United States, including the monster blue catfish, the chance to score that world record is always there.

So, what is biggest catfish ever caught?

Let's dive in and explore the largest catfish that has ever been caught, as well as a few runner-ups!

The largest catfish ever reeled in was the massive Mekong giant catfish, which was caught near a remote village in Thailand back in 2005.

Many fishing experts believe that this behemoth Mekong River catfish was not only the largest catfish that had ever been caught but was also the largest freshwater fish recorded. 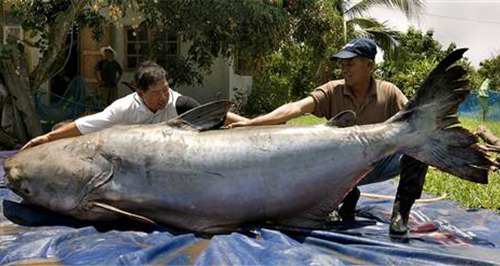 Beyond the fact that it weighed an impressive 646 pounds, it was also nine feet long, which is why it's not hard to imagine that it took the fishermen that caught it more than an hour to reel it in! Unfortunately, this big fish ended up dying, even though the Thailand Inland Fishery Department had plans to use her for their breeding program.

The good thing is, the villagers nearby had meals for days! 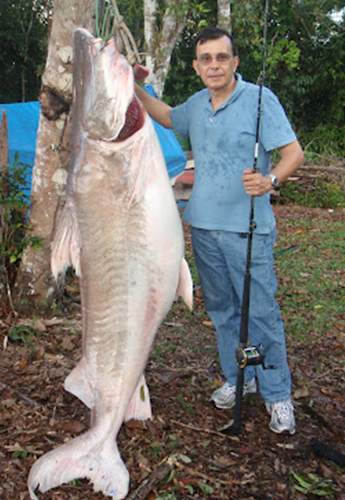 This unique species of catfish is a South American native. Aguiar caught this fish, which weighed 341 pounds and 11 ounces, back in 2009. This world record Lau-Lau was also over 6.5 feet long!

While Aguiar has the largest cath on record today, fish experts say that Piraiba can easily weigh more than 450 pounds out in the wild!

FUN FACT: Piraiba is the largest species of catfish found in the Amazon!

In fact, they are so large that people have found birds, monkeys, cats, and dogs in their stomachs.

In 2015, Dino Ferrari made international headlines when he reeled in this massive Wels catfish while fishing.

The strange thing is that the international game fish association website does not have much information on that particular catch, and Ferrari has such a cool story that it was worth mentioning! 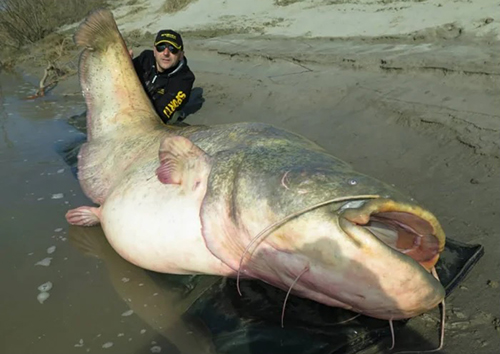 Another unique thing worth mentioning is that Ferrari caught this fish with an Italian Torpedo spinning rod, meaning he might have broken the record for catching this large of a fish with that type of rod. Wels said that it took him around 40 minutes to reel in this large fish, though he chose to throw it back into the river so that future fishermen could have a chance at catching it.

FUN FACT: The wels catfish earned itself the #1 position on our list of Most Dangerous Fish In The World! 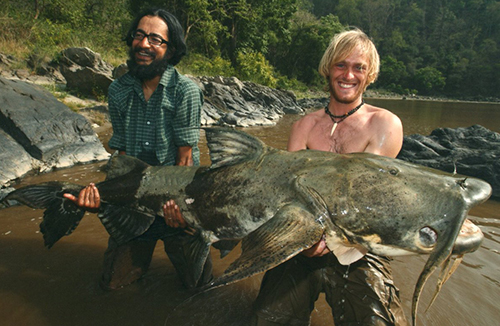 Jakub Vagner, the host of Nat Geo's "Fish Warrior," holds the world record for the biggest goonch ever nabbed. This huge goonch was 165 pounds and five ounces and just over five feet long. Vagner caught this big boy when fishing on the River Ramganga in India.

Vagner has caught several large fish in the past beyond this large goonch, including a 242-pound Wels catfish and a 286-pound Arapaima. Vagner did a recent interview where he said we was currently looking to find the world record Goliath Tiger Fish, which can be found in the Congo River.

FUN FACT: Goonch fish are corpse eaters! The Kali River runs between India and Nepal and is a very popular river for funeral pyres. This fact is one of the reasons researchers believe Goonch were able to grow so large. Now, it is believed that they have an appetite for human flesh!

Richard Nicholas Anderson caught the world record blue catfish back in 2011 while fishing on Kerr Lake in Virginia.

This massive blue catfish came in at 143 pounds and over 4.75 feet long.

Anderson said it took him around 45 minutes to reel in this huge bluey.

According to chief Gary Martel of the VDGIF, it was surprising that this blue catfish catch was this large.

Anderson tried to keep this bluey living so that he could take it to his local Bass Pro Shop and keep it in a tank, though, unfortunately, the fish died. 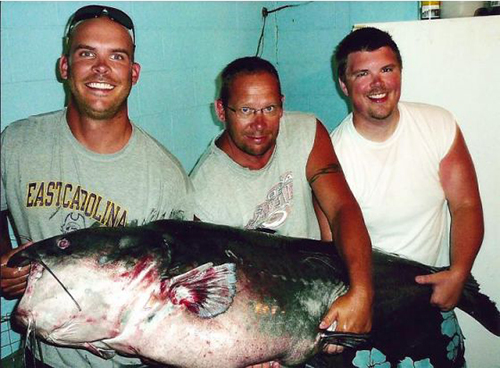 FUN FACT: One strange thing about blue catfish is that they were introduced to Virginia rivers back in the 70s. However, they've now grown out of control and are considered invasive species. 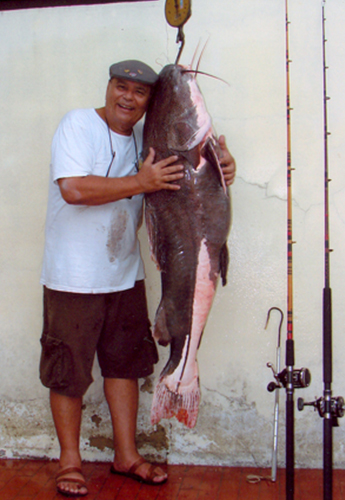 The world record title for the largest redtail catfish ever caught went to Gilberto Fernandes in 2010, when he caught this massive fish while fishing in the Amazon River in Brazil.

The redtail catfish weighed in at 123 pounds and seven ounces and was more than 4.62 feet long. While we weren't able to get tons of information regarding this particular catch, we do know that Fernandes used a fiberglass Sportex rod to reel in this redtail.

What was surprising to find out is that this isn't Fernandes' first fishing rodeo.

In fact, he has more than 100 IGFA world record fishing titles under his name.

Less than a month before landing this giant redtail, he caught a similar-sized redtail at just over 113 pounds.

One unique thing about redtail catfish is that they'll pretty much eat anything, including crustaceans, fish, frozen foods, dry foods, assorted worms, and just about any kind of food that floats down to them. 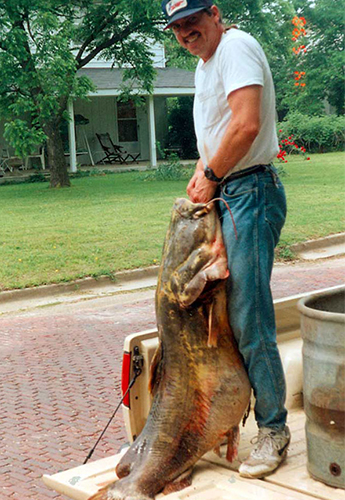 The world record flathead catfish catch belongs to Ken Paulie, who reeled in his massive flathead back in 1998.

This flathead catfish weighed in at 124 pounds and was more than 5 feet long.

The Kansas Department of Wildlife and Parks has had Paulie's record standing for more than two decades at this point, though there are many fishermen that say this was a lucky catch, as he was using a light tackle at the time.

Before Paulie presented his catch to the Kansas Department of Wildlife, Parks, and Tourism, he kept it frozen for almost 18 years.

The official record now says this fish was most likely male and grew very rapidly during its living years.

Want to see more of the World's biggest fish?  Head over to our recent articles: