Have you ever wondered why barnacles live on whales?

These marine creatures cling on to a whale's body, hitchhiking around the ocean feeding as they go. They have truly amazing adaptations to ensure the survival of their species, from mobile, water-borne barnacle larvae to adult barnacles with their protective hard shells.

For answers to your questions about whales and barnacles, you should carry on reading.

Why Do Barnacles Grow On Whales?

Barnacles are types of marine crustaceans that are related to lobsters and crabs. There are many different barnacle species found all over the world. They can be found firmly attached to rocks, ship hulls, and even living on ocean animals, such as whales and sea turtles. But why do whales have barnacles?

Why Do Barnacles Live On Whales?

In the symbiotic relationship between whales and barnacles, it is only the barnacles that reap the benefits of being attached to the whale. 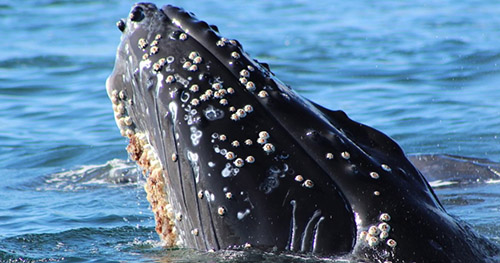 Whales provide the lucky barnacles with a place to live, as well as access to food, but don't get much in return.

One marine biologist suspected that barnacles may prove useful when the males fight, as the barnacle shells provide a hard and sharp coat which could give the whale an advantage in this situation.

You can easily spot barnacles on whales, look for the white areas surrounded by orange-colored patches.

In case you are wondering about their longevity, barnacles' lives aren't very long. Barnacles die after about five to ten years, or sooner if they detach from the whale's body.

How Do Barnacles Attach To Whales?

Barnacles start off life as microscopic larvae, as do many other species of oceanic invertebrates, floating around on currents. You may be wondering how barnacles gain access to whales in the first place.

Filter-feeding whales, also known as baleen whales, like gray whales, feed on plankton near the surface of the ocean. It is likely that the barnacle larvae encounter the gentle giants while they're eating, though it is not certain exactly how the barnacle larvae find the whales.

It's thought that barnacles may have evolved to coordinate their breeding season with that of whales. Whales migrate to shallow waters, moving more slowly during the breeding season. One theory is that when the whale swims close to the spawning barnacles, the drifting larvae can then embed into the passing whale's skin.

What Do Barnacles Eat? 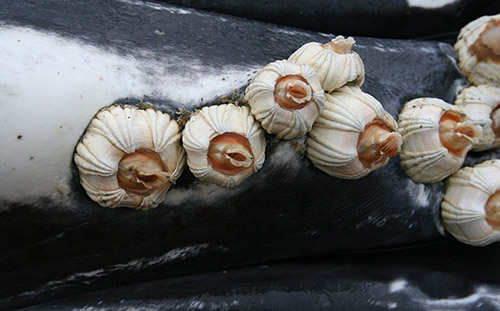 Barnacles don't eat the whale's flesh, as barnacles are in fact filter-feeders themselves!

Barnacles only attach themselves to certain areas of the whale's body.

Since they eat by filter-feeding, barnacles benefit from living on places where there is a consistent flow of water, such as the on the whale's head, back, tail flukes, and fins.

When the whales swim through plankton-rich waters, these barnacles get to feed on the plankton as well.

Barnacles have feet that are fan-shaped and they use them to sweep up the plankton from the ocean water. The barnacles benefit further from living on whales, as they are better protected from predators, such as whelks.

Although you might think that barnacles are parasites, they don't hurt the whales, as true parasites would. They also don't give the whale massive advantages in terms of survival.

The orange-colored patches that form around the barnacles are actually the whale lice. It is thought that barnacles may provide helpful lice with a spot to cling to without being washed away.

Like barnacles, whale lice are another hitchhiker, eating bits of dead whale skin and tissues, which is of benefit to the whale. Whale lice can spread to baby whales from their mother. To get rid of whale lice and barnacles, whales rub themselves against the sea bottom to scrape them off if they get too annoying. This is also one theory as to why whales breach.

There are some possible negative consequences of barnacles. Skin infections can develop if they attach to the whale's skin too deeply.

Barnacle scars can also be left on the host whale after the barnacles die and fall off or if the whale rubs them off. A whale with loads of barnacles might also experience drag when swimming.

Do All Whales Have Barnacles?

While there are lots of whale species, there even more different barnacle species. Over a thousand in fact!

The number of barnacles on individual whales will vary between animals. 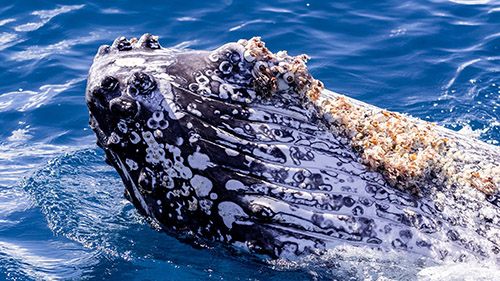 Most whale barnacle species are actually unique to the whale species they live on.

Gray whales can end up hosting hundreds of pounds of barnacles whereas a single humpback whale can carry 1,000 pounds of them! Imagine carrying that much extra weight! Since humpback whales are extremely large, lugging those extra pounds around doesn't actually bother them.

Certain barnacles have adapted and evolved to thrive off making whale skin their home. The whale's skin has its own little ecosystem for these small creatures, along with other animals such as whale lice.

If you are ever lucky enough to go whale watching and you spot some baleen whales, don't forget to keep an eye out for these fascinating crustaceans! Look for the white areas surrounded by orange-colored patches.