Are There Sharks In The Great Lakes?

So, is it possible that sharks survive in the fresh waters of the Great Lakes?

The Great Lakes, which sit in between the borders of Canada and the United States, are among the largest bodies of fresh water on Earth. As a result, many people think of them as inland oceans.

Today, we will explore beneath the surface and learn about the possibility of sharks inhabiting these waters .

Are There Bull Sharks In The Great Lakes?

Coming in at #3 on our most dangerous & aggressive sharks list, the bull shark is a force to be reckoned with. Luckily, as of today, there are no scientifically proven reports of bull sharks in any of the Great Lakes. The only close documented case was a shark seen wandering around in the Illinois River. However, it's difficult for sharks to get into the river with new dams that are now in place.

With that said, plenty of bull sharks have been found in freshwater regions worldwide, including the Amazon and the Mississippi River.

Scientists find it hard to believe that the bull shark species reside in the Great Lakes because these waters lack the prey that align with the shark's diet.

Are There Sharks In Lake Michigan? 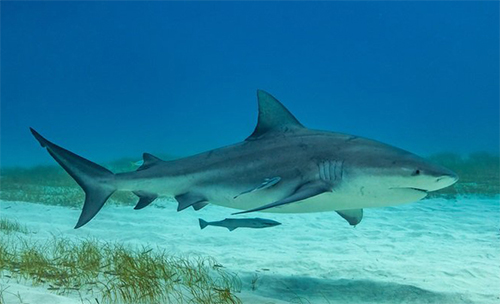 Lake Michigan is the largest lake that lies within a single country, bordering the shorelines of Milwaukee and Chicago between Indiana, Illinois, Wisconsin, and Michigan. Because it has such a large surface area, many people wonder whether sharks reside in Lake Michigan.

Though there have been many shark sightings in Lake Michigan, Phillip Willink, a well-respected biologist at the local Shedd Aquarium, says that all of these sightings have turned out to be fake.

Plus, there are a few reasons why there probably wouldn't be sharks in Lake Michigan.

For starters, sharks require at least 70-degree water temperatures to survive. Because of this temperature requirement, Lake Michigan isn't very suitable, as it only reaches 70 degrees a few weeks out of the year.

Secondly, the city of Illinois put up a large electrical barrier back in 2002 to stop invasive species from feeding into the lake from the Chicago River, including Asian Carp. Many experts believe that this electric barrier would not suit shark travel.

Are There Sharks In Lake Superior?

If you couldn't already guess by the name, Lake Superior is the largest of the Great Lakes. In fact, in terms of surface area, it is the largest freshwater lake on Earth.

Stretching from the states of Michigan, Wisconsin, and Minnesota to the northern shores of Ontario, the average water temperature in this lake is around 40 degrees Fahrenheit, meaning sharks would have a very difficult time living here.

Are There Sharks In Lake Erie?

The warmest, shallowest, and southernmost of the Great Lakes is Lake Erie. This lake borders New York, Pennsylvania, Ohio, and Michigan. As of today, no one has documented any clear shark reports in Lake Erie.

Are There Sharks In Lake Ontario?

Sharing borders with the state of New York and Ontario, Canada, Lake Ontario is the last in the chain of Great Lakes. It connects the Saint Lawrence River with the Atlantic Ocean. With the St Lawrence lock system in place, it is difficult for sharks to go up through the river and into the lakes. 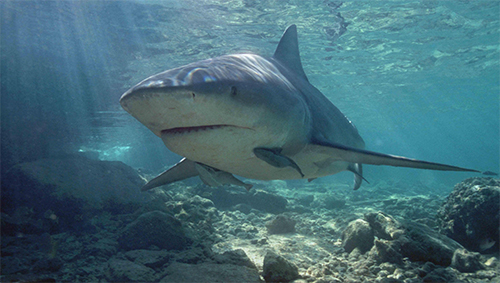 Are There Sharks In Lake Huron?

Final Thoughts - Could Sharks Ever Reach The Great Lakes?

While all of the bull shark sightings in the Great Lakes have come out as hoaxes or unproven, it doesn't mean it's impossible that we'll ever find them in the Great Lakes. Many researchers pose the theory that sharks could end up getting pulled into the Great Lakes on the ballast of large container ships.

Essentially, a shark could get caught up in a ship's ballast, where it would take a hitchhiking journey to the Great Lakes, preying on other fish caught in the ballast. Eventually, the ship would arrive at a port in one of the lakes, where the shark would be expelled with the rest of the water in the ballast.

Of course, even if the shark was dropped off in one of these inland seas, it would still have to survive the extremely cold temperatures throughout most of the year, which seems highly unlikely. So yes, when swimming around in the lakes this summer, don't fret. There's a 99.99% chance that the shadow you see floating around in the water is NOT a shark.