For hundreds of millions of years, sharks have ruled the oceans with an iron fist. While many believe that sharks, with over 400 species in their family, are mammals, they are really part of the fish family!

Dive in with us as we learn more about sharks!

So, are sharks fish or mammals?

Sharks are fish! As with most fish, sharks live in water and breathe through their gills, filtering oxygen out of the ocean water.

Sharks are special because while most fish have bony skeletons, a shark's body structure is made of cartilage.

All cartilaginous fish fall under the "elasmobranch" classification.

Skates, sawfish, and rays are right next to sharks as a part of the elasmobranchii subclass. 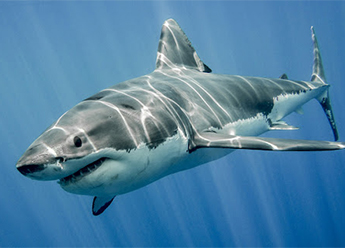 There are a few reasons that sharks are categorized as fish, including:

Why Are Sharks Not Mammals? 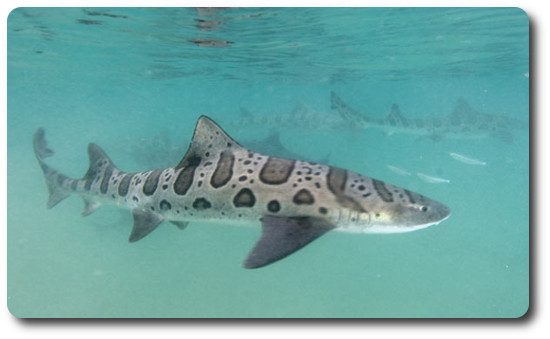 The fact that most sharks give birth to live young is what leads many of us to assume they're mammals. Other people get confused by the differences between sharks and other marine mammals like killer whales, porpoises, and dolphins. Though sharks may look similar to these other marine mammals in terms of size and shape, they're far different.

For starters, sharks are not mammals because most of them are cold-blooded animals, while mammals are warm-blooded. Unlike mammals, most sharks cannot regulate their body temperatures.

Sharks also do not produce milk. Mammals produce milk for their infants because their infants require it for the first few weeks/months of life. Every female mammal has mammary glands, which they use to nurse their little ones.

Third, sharks also don't have hair. All mammals have hair or fur, though there are a few marine mammals that we classify as exceptions in this case.

Number four, sharks do not breathe air using their lungs like mammals. Sharks breathe using their gills. With that said, there are mammalian species that live underneath the water, including whales and dolphins, which have to breathe by coming up for air, however the do this through their blowholes and do not utilize gills for oxygenation.

The single characteristic that the shark species shares with mammals is that most sharks give birth to live young. However, there are also some that lay eggs.

While most mammals that come to mind live are on land, there are many mammal species that live in the sea. 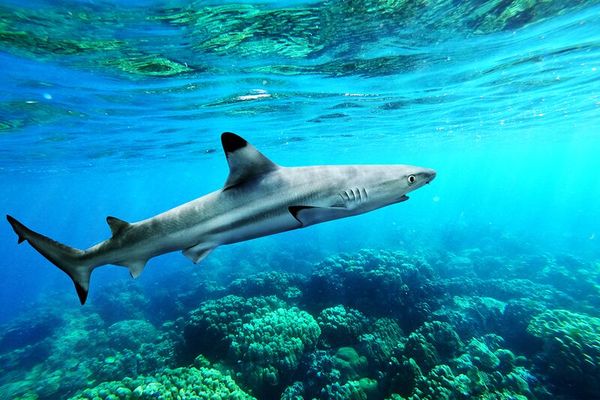 FUN FACT: The one major exception to the mammalian characteristic in which they lay eggs is the platypus, which lays eggs.

How Long Do Sharks Live?

While sharks have lifespans that vary depending on the species, but the majority of small sharks live about 20 to 30 years in the wild. Of course, some live much longer.

Great white sharks, some of the most popular sharks in the ocean, can live to be about 27 on average, and a lucky great white shark can live up to 50 years. Healthy whale sharks can live more than 100 years.

The oldest shark is the Greenland shark which can live for to close to 400 years!

How Many Different Types Of Sharks Are There?

As of today, scientists have discovered more than 400 species of sharks. Some of the best-known shark varieties include: 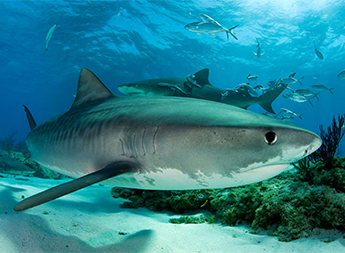 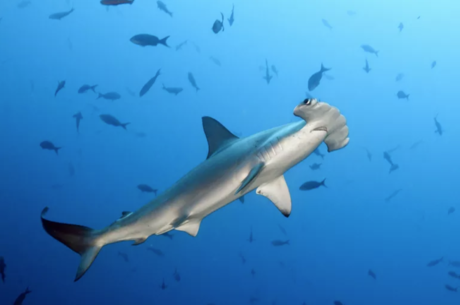 How are Sharks and Fish Different From Most Marine Mammals?

Marine mammals have adapted to live in or near oceans or other bodies of water. With sleek bodies and unique features, they are less water-resistant, allowing them to move about quickly and freely in the ocean.

Marine mammals also have special hearts and lungs that allow them to breathe underneath the water. To keep warm, they typically have insulated fat, and to help them move quickly, they typically use flippers or fins.

Sirenians and cetaceans spend all of their lives underneath the sea, while pinnipeds will move between sea and land. Fissipeds, however, will spend the majority of their time on land.

Fish and sharks, as we know, spend their entire lives underneath the ocean.

How Many Babies Do Sharks Have?

The number of babies that a shark has depends on the particular species. Sharks that give birth to live young called pups, include the following species: blue sharks, lemon sharks, bull sharks, mako sharks and great whites. Great white sharks, for example, will typically give birth to either one or two pups. Other shark species, however, may give birth to up to 20 pups at once.

What Kinds of Fish are Sharks?

There are three different types of fish, including: 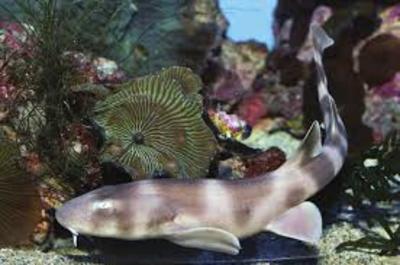 Lampreys are good examples of jawless fish, though the most fish out there fall under the bony fish category. Bony fish have bony skeletons, as the name suggests, as well as swim bladders, which allow them to remain in serious depths for long periods.

Sharks fall under the cartilaginous fish species, meaning their skeletons are made out of cartilage, not bone. Unlike bony fish, sharks do not have swim bladders.

How Sharks Give Birth?

Sharks give birth to their young in a few different ways. They can either be:

Viviparous sharks, such as hammerhead sharks, give birth to live babies.

Oviparous sharks lay eggs that will remain inside egg sacs until they develop into pups or baby sharks. Once the eggs are ready, the shark will give birth to its live young.

This egg sac is known as a mermaid's purse and has a unique bundle of nutrients that pups need to grow and develop.

Lastly, ovoviviparous sharks produce eggs that remain within the shark's bodies until the sharks are ready to give birth.

The other reason for their drastic decrease in numbers comes from pollution and habitat destruction.

Sadly, when shark populations decrease, it takes them a very long time to come back. This is partly due to the fact that the average shark won't reproduce until it is around 15 years old.

Head over to our "How Many Sharks Are Killed A Year" informational article to learn more.