When most people think of the octopus, they think of a shy, mild-mannered, eight-armed sea creature they could be friends with if they were a sea dweller. However, if you look to ancient sea tales, it was common for mariners to describe octopuses and squid as massive, monstrous creatures that could bring down sea vessels.

Of course, these tales are only fiction.

Real octopuses are inquisitive and curious creatures that would rarely if ever, harm a human being. However, that doesn't mean that octopuses aren't dangerous in their own right.

Come with us as we explore the question of "How Dangerous are Octopus?"

Can An Octopus Kill You?

Yes, while an octopus could kill you if you were bitten and left alone with no help, this rarely happens, as octopuses are very passive giants. However, the blue-ringed octopus is one of the most venomous animals on Earth and could cause death with just one bite.

With that said, Octopuses are more of a threat to themselves. They are what scientists call "semelparous" animals, meaning they reproduce only one time before dying. Many scientists believe that these animals have been biologically programmed to die after reproduction so as not to cannibalize their young.

All octopuses can bite. A bite from a blue-ringed octopus, however, can be fatal, as they are highly poisonous creatures. It's uncommon for humans to get bitten by this dangerous octopus unless they accidentally or intentionally provoke or disturb it while snorkeling or scuba diving.

Only the venom of the blue-ringed octopus is life-threatening to humans.

Why Are Blue Ringed Octopus Dangerous?

The unique toxin inside the blue-ringed octopus' salivary glands is what makes it such a deadly creature. Each blue-ringed octopus stores so much of this toxin, that it is capable of killing over 20 humans within just a few minutes.

While these tiny octopuses only grow up to eight inches at most, their venom is extremely powerful and there is no known antidote. Containing dopamine and tetrodotoxin, the distinctive neurotoxin of the tiny blue-ringed octopus is more than 1,200 times as deadly as cyanide.

For the blue-ringed octopus to deliver this rare venom, it would need to bite a person. However, because the bites are so small, the victim may not even feel it. 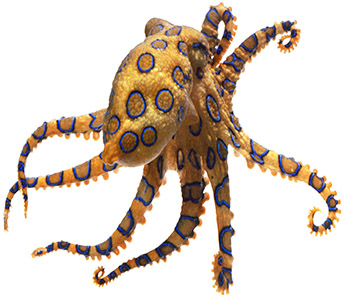 It would take a few minutes for that individual to develop shortness of breath and sudden nausea before muscle paralysis kicked in. Eventually, if the victim was unattended, they would succumb to cardiac and respiratory arrest.

While the number of fatalities is not agreed upon, it is estimated that under 20 people have died from a blue-ringed octopus bite.

Are All Octopuses Venomous?

According to a recent study on venomous animals, all octopuses are venomous. Thankfully, there is only one that is known to cause fatalities in humans. That is the blue-ringed octopus. This species can be found around coral reefs and tidal pools in the Pacific and Indian oceans.

It is very rare for an octopus to attack a human being.

Before they bite, octopuses will shoot out a cloud of ink as a warning. So if you see a cloud of ink that appears in front of you, it's best to steer clear.

What Would Happen If An Octopus Grabbed You?

An octopus would probably only grab you if it felt threatened and was acting in self-defense. When an octopus attacks, it secures one of its eight arms to a rock or coral formation and grabs its prey with another arm. Once it has a firm grip, it then moves the subject from one sucker to the next towards its beak or mouth. 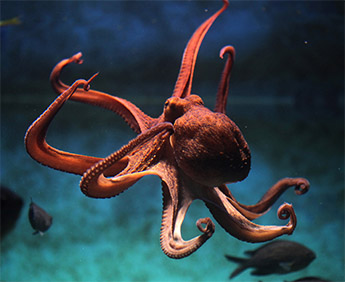 The giant Pacific Octopus is the biggest octopus species, can grow as large as 600 pounds with a wingspan of up to 30 feet, and mostly resides throughout the Northern Pacific Ocean.

If a giant Pacific Octopus was able to snare a diver, it could definitely break its diving equipment and be extremely dangerous.

However, the giant Pacific Octopus is a fairly passive creature. If left alone, it is unlikely to harm you.

A woman from Washington placed a baby octopus, believed to be of the Giant Pacific Octopus species, near her face to take a photo.

The baby octopus bit her and injected her with venom, sending her to the hospital where she recovered, thanks to antibiotics.

While cases like these are extremely rare, experts noted that the octopus only attacked because it felt threatened after the woman took it out of the water and held it near her face.

The Octopuses Closest Cousin: The Squid

Is The Humboldt Squid Dangerous?

The Humboldt squid is often referred to as the "man-eating squid" due to the fact that many believe they swarms in large groups and can devour full-grown men. While this squid travels in swarms of several hundred, and grows between three and six feet in length, they don't have any intention of harming humans. However, they are very curious creatures, and if they ever approached a person, they could do some accidental damage with their large beaks.

The giant squid is one of the largest myths surrounding the octopus species. This massive creature was said to sink ships and feast on their crews. The largest squid ever found, however, was only 43 feet long.

The colossal squid is by no means one of the most dangerous creatures in the ocean, though some sperm whales have been found with battle scars from their massive suckers.

These massive squids are part of the family of cephalopods, which contain octopuses, squid, nautiluses, and cuttlefish, and are considered a cousin to the octopus.

If you liked this article, you will love our others!

Most Dangerous Fish In The World