Despite its wildly terrifying appearance, the angler fish is a relatively small specimen in the grand scheme of things. In fact, most angler fish only reach a maximum of five inches.

However, with that said, some deep-sea anglerfish can grow up to 3.3 feet long.

Let's dive in and explore more about the elusive angler fish!

What Is An Angler Fish?

The angler fish received its name due to its body composition. It is a bonefish in the teleost order lifeforms. These fish often vary in length, growing anywhere from 1 to 7 inches on average.

Their skeletal makeup is by far the most interesting part of the anglerfish, in that the first spine in the dorsal fin acts as a fishing rod.

The deep-sea anglerfish is another species of anglerfish that lives in the deep ocean in the bathypelagic zone.

There are over 200 different anglerfish species, 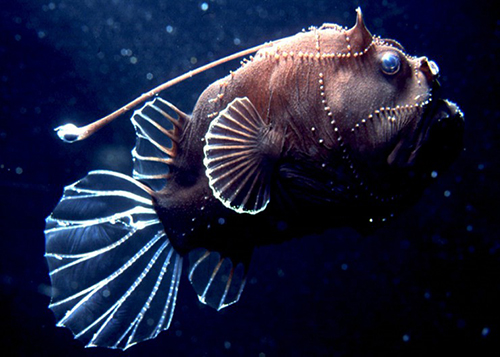 one of the most popular being the humpback anglerfish. While most of these fish live in the depths of the Atlantic and Antarctic oceans, there are a few that enjoy the murky water that lies just a mile beneath the ocean's surface.

These fish are typically dark brown and grey and have massive heads with sharp, translucent teeth. Their faces are crescent-shaped, which is probably their most distinctive feature among most fish.

The unique thing about this species is that they are parasitic mates, meaning a male will latch onto the female's body using its extremely sharp teeth. The teeth will eventually dissolve into the body of the female, fusing with her bloodstream and skin.

Most male anglerfish will lose their eyes and internal organs. What's even stranger is that it's not uncommon to find more than six male anglerfish latched onto a female's body.

FUN FACT: Females will often consume their mates. Dating doesn't seem so bad now, does it?

These Mariana trench animals have the ability to survive where few others can.  Special adaptations for their environment include a lure on their heads which is used to explore the darkest depths of the sea. The very top of the lure has luminescent flesh. This lure helps them attract prey and explore the dark sea. Many people say the lure of the anglerfish acts as a fishing pole, hence their name.

The luminescent portion of this lure is unique in that it exists through the interaction of millions of bacteria. Uniquely enough, when the deep-sea anglerfish does not want to be found, it can hide its lure with a large, muscular flap.

However, this is far from the only thing anglerfish will use to survive in a dangerous sea environment.

Many researchers have found that anglerfish spend up to 74% of their lives drifting, even though they are extremely fast swimmers. While most of us would look at this as a lethargic act, it is actually quite smart considering how energy-deficient the deep sea is.

One other unique thing about the anglerfish species is that they often consume prey up to twice their size. Anglerfish are able to extend their jaws and stomachs, storing food and maintaining energy until the next time they can catch prey.

In the depths of the sea, finding another fish to eat could take quite some time.