If you want to look like the smart one in your group of friends next time you come across one of these giant reptiles, then our alligator vs crocodile guide will give you everything you need to know!

The confusion is totally understandable, as all alligators are crocodiles. However, not all crocodiles are alligators.

How Are Alligators And Crocodiles Different?

Though both of these large reptiles come from the Crocodilia order, they are different in many ways, including size, color, and snout shape. It's actually pretty easy to tell the differences between these reptiles at first glance once you know what you're looking for.

Let's dive in and explore some of the most significant differences.

Getting a good look at the snout of an alligator or crocodile is one of the best ways to tell which one you're looking at.

The snout will remain the same, regardless of the species.

You will also see five visible bottom teeth in the v-shaped snout of the crocodile. 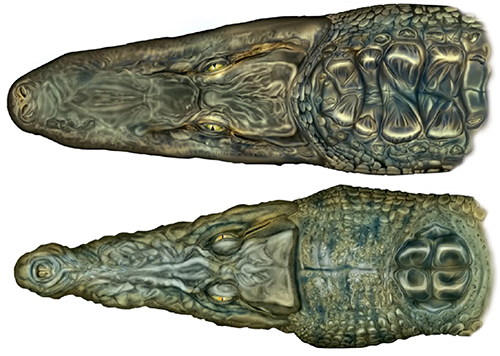 While a crocodile may have a very narrow or very wide snout, it will always have a point at the end.

This is because their jaws, unlike alligators, close from the top down.

You can only see the top teeth on an alligator as its jaw closes downward. When an alligator's mouth is shut, its bottom teeth remain hidden thanks to notches in its jaw.

Crocodiles tend to grow much larger than alligators. The average crocodile can grow anywhere from 10 to 20 feet long and weigh anywhere from 300 to 2,000 pounds.

On the other hand, alligators will often grow to anywhere between 8.2 and 11.2 feet long and weigh anywhere from 400 to 800 pounds.

If you'd like to see just how big these massive reptiles can get, pay a visit to these articles:

Largest Crocodile Ever Recorded and Biggest Alligator In The World. 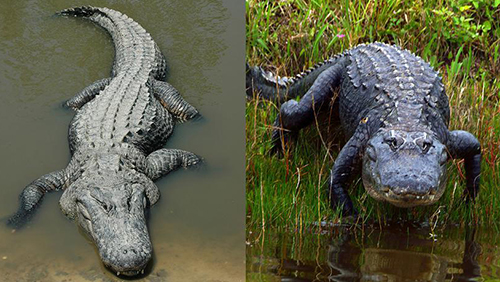 Another easy way to tell the difference between an alligator and a crocodile is with its colors. Crocodiles almost always come in shades of grey, black, brown, or green. Most often, these creatures also have speckled patterns on their skin, which allows them to blend in with the substrate and algae.

The American crocodile is unique in that it is a slate grey color with a yellow and white underbelly. Scientists refer to this dual light and dark coloration as countershading.

American crocs can blend into the water while hunting with this unique coloration. The color of the environment actually has a lot to do with the color of a crocodile. The saltwater crocodile, for example, comes in the green shade that most everyone thinks of when thinking of the crocodile species. These magnificent green colors allow them to blend in with algae.

Alligators, on the other hand, are typically black or dark green. The American alligator is unique with its shiny dark green color, which gives off a black look depending on the light it's in. Compared to crocodiles, alligators are often much darker. With that said, their colors can certainly vary depending on the environment they live.

The range of the American alligator is quite small, ranging from North Carolina to Texas. Chinese alligators are found along the Yangtze River in China.

On the other hand, crocodiles have a much wider habitat distribution, as many of them, unlike alligators, are saltwater tolerant.

Of course, because of the mix of freshwater and saltwater in Florida, you find American alligators and crocodiles.

However, crocodiles have greater access to prey compared to alligators due to their wider habitat range and the fact that they live in saltwater.

Interestingly, both alligators and crocodiles have been found eating fruit, though fruit is far from a significant part of the alligator or crocodile diet.

Both alligators and crocodiles are what we call apex predators, meaning they are at the tops of their respective food chains. Both of these animals thrive in aquatic environments, spending most of their time in the water. However, alligators don't have great sight when in the water, as they must make use of a special membrane that protects their eyes when beneath the surface.

With that said, they are great at feeling out vibrations, which is one of the reasons they are such incredible hunters. Plus, alligators have extraordinary night eyesight.

Crocodiles, on the other hand, have much better eyesight and nocturnal vision, even though they have the same additional eyelid as alligators.

Where they truly differ is the way that they hunt.

Alligators are very opportunistic when it comes to hunting, waiting in shallow waters for their prey to come by before attacking it. More often than not, alligators will sit with their eyes and nostrils slightly protruding from the water's surface so that the rest of their bodies are hidden.

Once they see their prey nearing the water's edge, they will run at it and grab it with their powerful teeth and jaws. Astonishingly, an alligator can run up to 35 miles per hour! But only for short distances.

Many alligators also wait around in tall grass to ambush their prey. 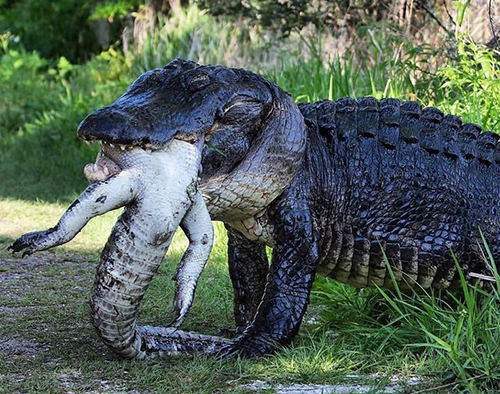 One of the most common ways that an alligator will kill is by clamping down on its prey with its teeth.

If on land, some alligators will use the death roll tactic, in which they grab hold of their prey with their jaws and roll their bodies on top of it again and again until their prey is dismembered or dead. This style of hunting is a great technique for larger mammals like bears or boars.

FUN FACT: An alligator's bite is strong enough to pierce through the shell of a turtle. 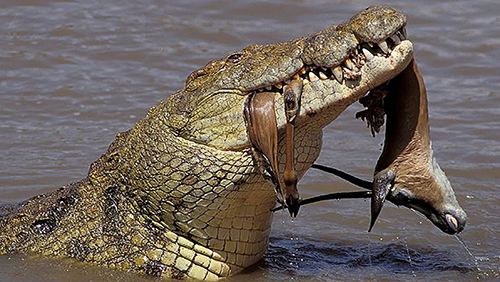 While crocodiles aren't as fast as alligators, they have a size advantage.

With the help of their incredible sense and powerful jaws, they can simply ambush their prey when they need a meal.

Crocodiles are similar to alligators in that they'll wait around in the water for their prey to come nearby before striking.

Often, crocodiles will drag their prey into the water to drown them before they eat them.

Thanks to their incredible size, they are able to kill larger prey like sharks and wildebeests.

They also have highly acidic stomachs, which allow them to digest hooves, bones, and other hunting byproducts.

While alligators and crocodiles can be very dangerous creatures, alligators tend to be far less aggressive than crocodiles. Many zookeepers will go about cleaning alligator pools while the alligators are still inside without ever getting a response from them. On the other hand, crocodiles most often react with aggression.

Humans get attacked by crocodiles pretty often, much more than sharks. In fact, there are hundreds of croc attacks that get reported each year, most of which happen in Egypt and Australia.

Compared to other species, American gators are pretty shy. But, of course, if a human provokes them, they will certainly attack. Out of all Crocodilian attacks that get reported, alligators only make up are six percent of attacks.

These unique species were alive more than 200 million years ago!

The first time scientists believed crocodiles ever made it onto land was when the Sarcosuchus came around. This unique croc species was more than 40 feet long and appeared in the fossil record over 110 million years ago.

The alligators we know today can only be traced back to the Cretaceous period, with some of the earliest ancestors being the Mourasuchus and the Deinosuchus.

Both alligators and crocodiles belong to the Crocodilia order, alongside gharials and caimans. However, while these two animals belong to the same order, they are not part of the same family.

Crocodiles are part of the Crocodylidae family, which has 13 different species. You can find these species throughout the United States, Southeast Asia, Africa, India, and Australia.

Alligators, on the other hand, belong to the Alligatoridae family, which includes two different alligator species and five different caiman species.

While the chances of an alligator and a crocodile meeting are very slim due to their large habitat differences, there is no reason why they couldn't have a brawl if they were both in Southern Florida.

Of course, that's why many people wonder,

Who would win in this reptilian battle?

When it comes to the stats, a crocodile would most likely win this fight. While alligators are much faster creatures, they are no match for the aggressive nature, bite power, and size of your average crocodile species.

It's pretty certain that even an alligator who was the same size as the crocodile it was fighting would lose due to the fact that the crocodile would most likely have better sense.

Do Alligators And Crocodiles Live Together?

Alligators and crocodiles only have a small habitat overlap in Southern Florida. Nowhere else in the world would you find these two reptiles.

However, even in the southernmost parts of Florida, you'll rarely find them living with one another. Alligators like spending their time hanging out along the banks of rivers or lakes, as well as in marshes and swamps.

Crocodiles, on the other hand, often spend their time out in the open water. They love camping where the rivers meet the sea, as there are typically good opportunities for food.

Do Alligators And Crocodiles Mate?

Can Alligators Regrow Their Tails?

Scientists recently discovered that alligators have the ability to regrow their tails. This unique trait makes them the largest species on Earth with regenerative capabilities.

Young alligators are able to grow back up to a whopping nine inches of a lost tail.

At this point, you should have a pretty good grasp of the difference between these two species. Of course, the major takeaway is that alligators and crocodiles are completely different species.

When it comes to identifying them, you can simply look at their colors, size, and jaw shapes.

While you should always practice caution when around areas with gators and crocs, remember that these animals are more afraid of you than you are of them.

One of the best things that you can do is respect their habitats so that you don't become potential prey!