Come paddle out with us as we explore one of the most remarkable women in the sport of surfing!

Alana Blanchard (who goes by Lana, according to those who are close with her) grew up in Kauai, Hawaii, with two brothers, Dorian Blanchard and Byron Blanchard.

In Hawaii, her father taught her how to surf when she was only four years old.

The first wave she ever surfed was at Hanalei Pier, and by age nine, she entered a surfing contest.

In 2003, when she was only 12 years old, she was out surfing with her surf buddy Bethany Hamilton when Hamilton was attacked by a shark and lost her arm. Blanchard's entire family was down on the beach when the two girls were in the water. 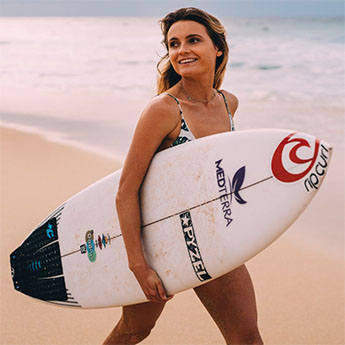 Blanchard and her family witnessed the traumatic event as it was happening.

While these best friends don't get to see each other as often as they say they'd like to, they remain close friends to this day and reconnect in the surf whenever they visit the annual Kona Keiki Classic.

Blanchard has said this was a defining moment for both of them as surfers. However, while Hamilton had to go through an arduous recovery process that lasted for many years, Blanchard took off on her career as a pro surfer.

People began taking note of her stylish bottom turns, as well as her undeniable physical beauty.

By age 14, Alana Blanchard developed a relationship as a semi-pro with Rip Curl. To this day, she still helps design Rip Curl swimwear. Most commonly, you can find the Blanchard name on wetsuits and bikinis.

Alana Blanchard was known for her impeccable frontside carving skills and effortless tube riding in the women's surf realm. 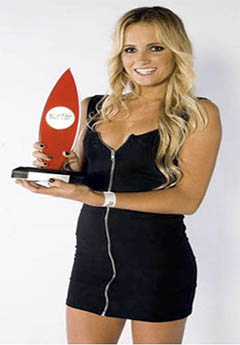 Beyond her public image as a sun-tanned bikini model and hot surfer girl, Alana is a pro surfer and her contest and heat championships speak for themselves. She has competed against some of the best in women's surfing and consistently comes out on top. From the ages of 18 to 25, she spent a fair amount of time on tour.

One of Alana's first significant wins was back in 2005 when she took home the T&C Women's Pipeline Surfing Championship title.

She continued winning events after that, one of the most iconic being the Haleiwa Roxy Pro Trials.

Two years later, she took on the waves of Oahu's North Shore and won the Cholo's Women's Pipeline Pro title.

That same year, she flew out to Spain, where she won the Rip Curl Pro.

Back in 2009, she took her first spot on the ASP World Tour at only 18. However, she didn't take home any wins until November of 2009, when she won the Van's Hawaiian Pro.

What Alana Blanchard Is Up To These Days: 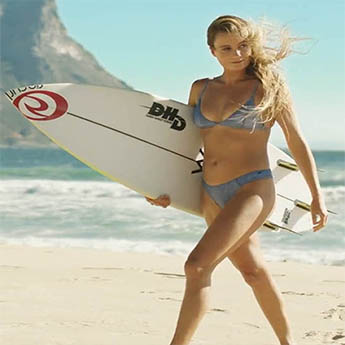 Alana has found a way to balance her personal and professional life as a surfer, model, mom, and businesswoman.

Alana and her surfer husband brought their little baby Banks onto the Earth back in December of 2017.

It was during this time that she spoke a lot about motherhood on social media.

One of the cool things we found out is that she continued riding until she was 20 weeks pregnant.

It wasn't until August 12, 2021, that Blanchard and her husband announced she was giving birth to her second son: Koda Riley Freestone.

She is vegan and very public about it, noting that she is passionate about all kinds of animals. Some of Alana's favorite recipes include vegan cookies, vegan banana bread, and vegan pumpkin pies.

She is very open about her personal life on social media, often talking about her two sons, her fitness routines, and her healthy lifestyle. Alana Blanchard is probably one of the biggest proponents of sunscreen in the surfer community, which is likely why she has such healthy, vibrant skin, even after many years in the sun.

One of her most recent campaigns was the T-Mobile Sony Xperia Z commercial, which came around back in 2013. During that same year, Blanchard was a featured athlete in the Sports Illustrated Swimsuit Edition.

Alana Blanchard is a MAJOR proponent of health and exercise. When she's not out in the surf, you can find her riding her bike, swimming, sprinting, doing yoga on the beach, or getting a pilates session in at the local studio.

She has said numerous times that she would much rather be out in the waves than modeling for photos. Alana has also noted a few times that she considers herself a "free surfer," meaning she is not attached to any brands or sponsors.

Back in 2017, she created the Alana Blanchard Foundation. Her goal in doing so was to provide development and support for the women's surf realm. While she doesn't compete as often as she used to, she decided to compete in the MEO Rip Curl Pro Portugal, where she came in 17th place.

Of course, many non-surfers find Alana through Instagram and other similar platforms, as she has created quite a name for herself. But, with millions of followers and a fanbase that continues to grow each day, you're already late to the party if you're not following her.

If you want to follow her on social media, you can find her at the following usernames:

The movie "Soul Surfer" is a biopic drama that features Alana and her friend Bethany during the shark attack incident when they were young. Actress Lorraine Nicholson plays Alana.